This would be first time in Pakist­an cricke­t team’s histor­y that player­s would wear logos of a charit­able...
By Sports Desk
Published: June 17, 2016
Tweet Email 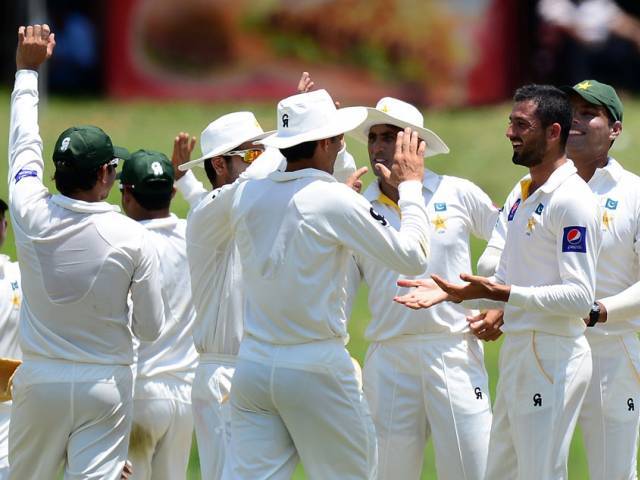 This would be the first time in Pakistan cricket team’s history that players would wear logos of a charitable organisation on their official kit. PHOTO: AFP

According to a correspondent, Pakistan team captains Misbahul Haq, Azhar Ali, and Sarfraz Ahmed will attend a ceremony later today to endorse the charitable organisation before departing for England tomorrow morning at 9:00am.

This would be the first time in Pakistan cricket team’s history that players would wear logos of a charitable organisation on their official kit.

To retire or not to retire: Misbah to announce soon

The tour of England will begin with four Test matches starting next month, with the first match being played at Lord’s cricket ground in London on July 14.

Prior to that, the national side will take part in a two-week training camp in Hampshire to acclimatise themselves to playing conditions in England.

Yesterday, British Prime Minister David Cameron said in a written message to the Men in Green and PCB that he hopes England cricket team will also tour Pakistan in the near future.

“I hope that one day, in the not too distant future, I will be able to wish the England cricket team a successful tour of Pakistan,” the British premier had said.

Pakistan last hosted a Test match on home soil in 2009 against Sri Lanka which was abandoned following a terrorist attack against the away team as they were on their way to the Gaddafi stadium for the third day’s play.

Since then, all of Pakistan’s home Test series are played in UAE.