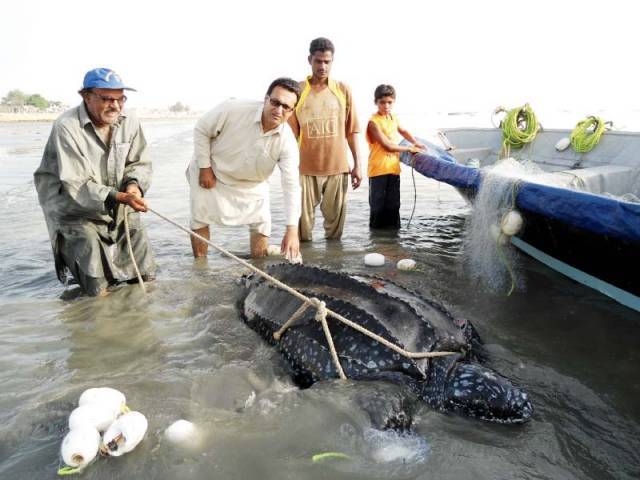 The Sindh wildlife department and WWF-P are working to save sea turtles in Pakistani waters but bad fishing practices are making their job difficult. PHOTO: COURTESY WWF-P

KARACHI: Sea turtles are negatively affected by the construction along Karachi’s beaches. For instance, huts at Sandspit Beach and other construction debris on beaches affect turtles’ presence. Turtles used to frequent the sandy beaches to lay eggs.

The rise in sea pollution, especially plastic waste, is another negative factor as green turtles mistake plastic for seaweed and feed on it. Marine fishing practices in Pakistan are also affecting sea turtles.

World Wildlife Fund – Pakistan (WWF-P) marine fisheries technical adviser Dr Moazzam Ali Khan shared some insights with The Express Tribune as the world celebrates Sea Turtles Day today (June 16). Pointing out different factors threatening sea turtles, he said that their nests are destroyed by stray dogs, as the canines tend to eat their eggs that they lay on the seashore. “They are also disturbed by the presence of people on the shores. Female turtles go back into waters when they feel disturbances,” he explained.

Dr Moazzam said that out of seven species of sea turtles, five are present in the Indian Ocean and can be found in Pakistan as well. “The green turtle and olive ridley are the most commonly found, while the leatherback, loggerhead and hawksbill are seen very rarely,” he said. He added that previously up to 95% of green turtles would come to visit Pakistan’s shores to lay their eggs. “This has been minimised,” he said. For the last 13 years, there has been no nesting evidence of olive ridley turtles either.

Fishing nets such as gillnets or trawlers pose the greatest threat to sea turtles. Professor Pirzada Jamal of the University of Karachi’s centre of excellence in marine biology said that the biggest problem is that turtles are often caught by fishermen, despite the fact that there are international laws regarding the use of Turtle Exploring Devices (TED) in fishing nets. “The practice is simply not followed here,” he lamented.

Marine wildlife: All about turtles on World Turtle Day

Adnan Khan, the incharge of marine conservation at the Sindh wildlife department, admitted that though by law every boat is equipped with a TED that filters the caught fish and leaves out the turtles, they are rarely used by fishermen. “They say by using a TED, their catch is affected, which is not true because the catch of fish is not affected by it,” he explained, adding that the devices are only there for the sake of European Union officials who come to scrutinise Pakistan’s fishing practices and report back. “We make the whole world a fool by our fishing methods,” he admitted. Another source of threat for these marine species is climate change, said Dr Moazzam. The rise in sea temperature affects the sea turtles’ reproduction. “Twenty-eight degrees is the suitable temperature for turtles to lay eggs. As the temperature rises much above that, for instance if it hits 33 degrees, only female turtles hatch,” he explained.

Dr Moazzam said that since the ban on the export of sea turtles in 1970, their export has been stopped completely. The smuggling that is reported is of an entirely different category of freshwater turtles. Adnan reiterated Moazzam’s statement that no smuggling of sea turtles has been reported. Referring to it as an ‘assumption’, he said that because of the easy availability of sea turtles, there is no need to smuggle them. He cited the consumption of fresh water turtles in countries such as China, Vietnam and the entire South East Asian region as the reason for their smuggling. “On the other hand, marine or sea turtles are found everywhere else in the world too. They are regularly consumed in Maldives, Sri Lanka and India and can be found globally,” said Adnan.

According to the Sindh wildlife department, around 0.2 million baby turtles were released back into the ocean last year, while over 0.6 million turtle nests were protected. According to WWF-P, the Sindh wildlife department has released 6.72 million turtles back into the ocean in the last 30 years and 2.42 million nests have been protected.