Kashi alias Chand was shot after she allege­dly resist­ed advanc­es of three uniden­tified men who barged into her house
By Our Correspondent
Published: June 13, 2016
Tweet Email 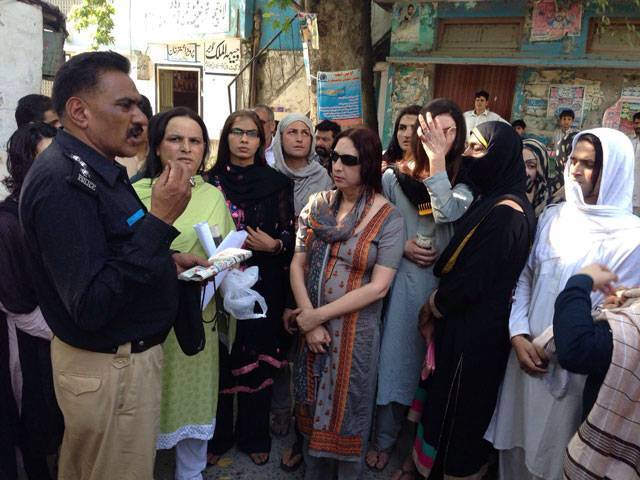 Transgender activists negotiate with a police officer during a protest rally taken out against murder attempt on Kashi alias Chand in Mansehra on June 13, 2016. PHOTO: EXPRESS

MANSEHRA: A transgender person has been critically injured after being shot multiple times for allegedly resisting sexual advances of a group of armed men who barged in to her house in Mansehra.

The development comes weeks after a transgender activist succumbed to her injuries after being shot multiple times in Khyber-Pakhtunkhwa’s provincial capital Peshawar and denied treatment at the hospital.

Providing details of Sunday night’s incident, police sources told The Express Tribune, “Kashi alias Chand was at her home when three armed persons, one of whom was identified as Kala Khan, barged into her home and started making sexual advances towards her which she resisted.” Transgender activists take out a protest rally in Mansehra against murder attempt on Kashi alias Chand on June 13, 2016. PHOTO: EXPRESS

The attackers managed to escape from the scene while the victim was shifted to King Abdullah Hospital for emergency medical treatment. She was later referred to Ayub Medical Complex in Abbottabad in critical condition.

The shooting incident sparked unrest among the transgender community which took to the streets on Monday to condemn the murder attempt and criticised the police for not providing them with security.

Led by the association’s president, Maria Khan, and general secretary Nadra Khan, the protesting group chanted slogans against the police.

“After the Peshawar incident, we informed the local police of threats some of our colleagues faced but the police exhibited their usual lethargy which led to murder attempt on Chand,” Maria said while speaking to The Express Tribune.

“Despite a lapse of 24 hours, the police have failed to trace and arrest the attackers which is a proof of the failed system of the Pakistan Tehreek-e-Insaf (PTI)’s government.”

Maria further demanded the provincial police chief to give directions for the early arrest of the accused.

Meanwhile, a criminal case has been registered against accused Kala Khan and two unidentified accomplices.

There has been an increase in incidents of violence against transgender people in K-P, where they have been beaten and their heads have been shaved. In more extreme cases, they have been targeted and killed.