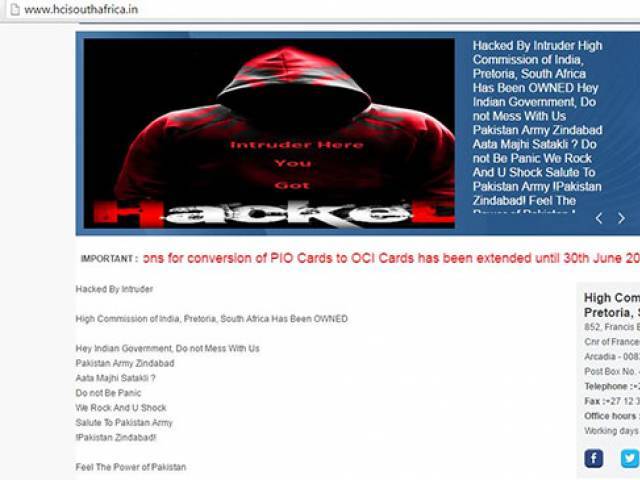 Seven Indian embassy websites have been hacked by a group who purportedly support Pakistan, The New Indian Express reported.

The hackers, who call themselves ‘Intruder’ and ‘Romantic’, have posted messages saying, “Embassy of India in Dushanbe, Tajikistan Has Been OWNED, Hey Indian Government, Do not Mess With Us  Pakistan Army Zindabad,  Aata Majhi Satakli? Do not Be Panic  We Rock And U Shock  Salute To Pakistan Army  !Pakistan Zindabad!    Feel The Power of Pakistan”.

The following sites have been hacked: In February, the official web portal of the Indian Revenue Service (IRS) was allegedly hacked by a suspected group of Pakistan-based hackers.

According to officials, the website which belonged to India’s Income Tax department, was hacked early Saturday and still remains offline.

Officials further claimed that messages, which read, ‘Pakistan Zindabad’ and ‘We are team Pak cyber attacker’, were posted on the website.

Authorities later took charge and left a message for their visitors, stating, “We’ll be back soon! Sorry for the inconvenience but we’re performing some maintenance at the moment.”

Separately, in May 2015, Indian music streaming website Gaana.com was hacked by a netizen who goes by the name Mak Man. It was later discovered that the hacker belonged to Pakistan, and is based in Lahore.