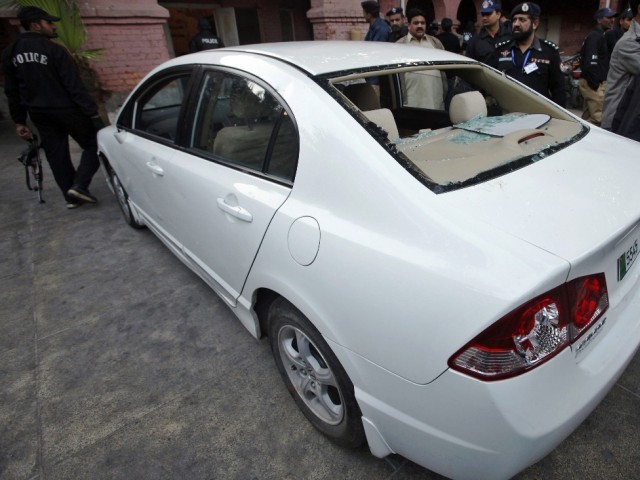 Policemen stand next to a car, which police said a U.S consulate employee was travelling in when he was engaged in a shoot-out, after it was brought to a police station in Lahore. PHOTO: REUTERS/FILE

LAHORE: A First Information Report (FIR) was registered on Monday against US citizen Raymond Davis for using an illegal weapon when he gunned down two men in Lahore.

The case against Davis has been registered on the investigation officer’s statement.

Davis is in the custody of the Lahore Police and is being questioned. Earlier, Davis was awarded a six-day physical remand by a court in Lahore.

Police have sent their investigation report to the Punjab government. The report states that Davis, the US embassy and the consulate in Lahore are not cooperating with the police. It states the officials concerned have not replied to a questionnaire sent to them. The report also claims that the Americans have not given the police information on the driver of a vehicle that ran over a third person during the incident.

Meanwhile, the Punjab government is set to inform the federal government of its investigations till now. It is also in contact with the US embassy and the consulate.

Earlier, Pakistan had rejected the US demand to release Davis, saying that sub judice in a court of law and the legal process should be respected.