Offici­al claims to have gunned down two men in self defenc­e.
By Rameez Khan
Published: January 28, 2011
Tweet Email 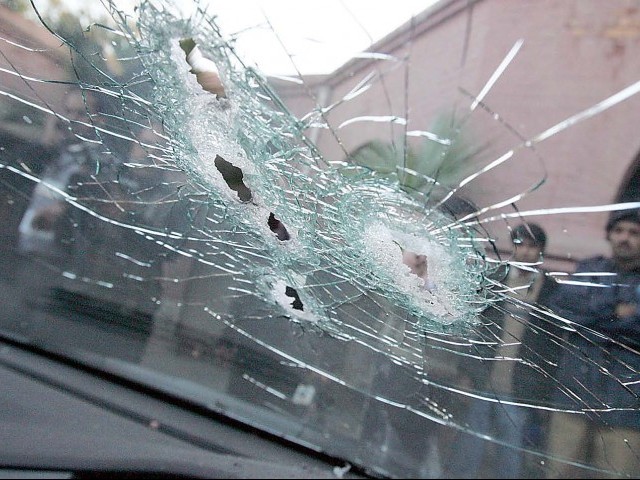 Broken windshield of the US diplomat’s car after he fired at two people in Lahore. PHOTO: IJAZ MAHMOOD

Two cases, including one for a double murder, have been registered against US diplomats involved in a dramatic shooting and hit-and-run incident, which claimed the lives of three men in Lahore on Thursday.

One diplomat has been charged for murder for killing two men on a motorbike allegedly in self defence, at Lahore’s Qartaba Chowk – while a companion of the diplomat, who is also an American citizen, crushed to death a bike rider in a hit-and-run incident, following the shooting.

The accused diplomat, Raymond Davis, opened fire at the two men – identified as Faizan Hayder, aged 22, and Faheem, 20 – at a traffic signal of Qartaba Chowk, after which he fled from the scene.

Two of his companions, who were in a Land Cruiser, tried to follow him but in an attempt to avoid a traffic jam entered the wrong side of the road and hit a motorcycle, killing one person.

However, two wardens managed to chase the diplomat and apprehended him at the Old Anarkali chowk.

Capital City Police Officer (CCPO) Muhammad Aslam Tarin confirmed that all three deceased had no previous criminal records, adding that none of them had robbed or fired at the diplomat.

Tareen further said that the American diplomat had shot at them, adding that two FIRs under Section 302 of PPC have been registered against the accused.

One FIR has been registered for shooting and killing two people, while another has registered against the unidentified accused involved in the hit-and-run.

Earlier reports suggested that the police declared those who were killed as armed dacoits. The CCPO had earlier said, “According to the diplomat two bike riders whipped out their pistol after which he fired at them in self defence and tried to flee from the scene.” He said that due to their suspicious movement, Davis thought they wanted to attack him.

Tarin said the accused was still in their custody and after consulting the embassy and prosecutors they would take action against him according to the law. He also said that the accused US diplomat was unable to show legal proof or license for carrying a weapon.

Superintendent of Police Umar Saeed Malik confirmed that both cars belonged to the US consulate. He said that the white car driven by Davis was headed towards a hotel when the incident occurred.

Ali Amjad, an eye witness, told The Express Tribune that the Land Cruiser, while following the fleeing car on Jail Road, collided with a biker identified as Ubaidur Rehman.

Davis’s car while on the run also injured a traffic warden who had tried to stop it. The car finally got stuck in a traffic jam at Anakali and was caught by the chasing warden along with an angry mob, Amjad said.

Raymond was then moved to Old Anarkali police station from where he was escorted to an unknown place by DSP Raza Safdar Kazmi in his official vehicle.

Amjad, who was present at the jail road at the time of the incident, said that the first shot was fired was from the car as, immediately after, the pillion rider fell from the bike. He said that more shots were fired from the car, after which it fled from the scene.

When contacted, US embassy spokesman Alberto Rodriguez told The Express Tribune that the embassy is working closely with the authorities and the consulate in Lahore on the issue. Although he confirmed that the US national is an employee of the consulate, he said he could not confirm his name or portfolio.

Hayder was a resident of Ravi Road and, according to his family, had left the house for the court to pursue a case against the killers of his brother who gunned him down a month ago. The family said that Hayder carried a pistol but only for self-defence. They further said that Hayder was not a dacoit, and was being used as a scapegoat by the police to save the skin of the American diplomat.

‘Suicide bomber’ may have been kidnapped