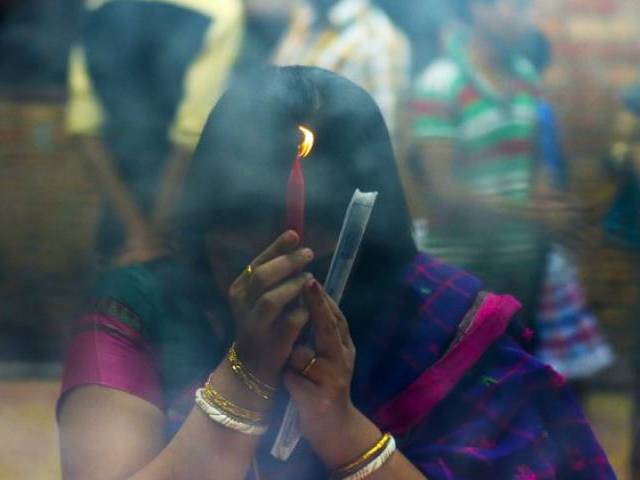 Bangladesh is reeling from a wave of murders of secular and liberal activists and religious minorities that have left more than 40 people dead in the last three years. PHOTO: AFP

DHAKA: Bangladesh police on Tuesday launched a deadly crackdown on ‘Islamist’ militants as a 70-year-old Hindu priest became the latest victim in a series of gruesome killings by suspected extremists.

As a government minister tried to portray the recent attacks as part of a conspiracy involving Israel’s Mossad spy agency, security forces waged deadly gunbattles with members of a homegrown ‘jihadist’ group.

Two “high-ranking” members of the Jamayetul Mujahideen Bangladesh (JMB) were shot dead in a battle in Dhaka and another was killed in a northwestern district, police told AFP.

The two JMB members killed in the capital had roles “in most of the recent attacks” including the bombing of a Shia mosque and the murder of a liberal professor, said deputy commissioner of police M R Khaled.

The third victim was killed in another gunfight in the town of Godagari in the northwestern district of Rajshahi, said local police chief Abu Forhad.

Bangladeshi authorities have been coming under mounting international pressure to end the string of attacks on religious minorities and secular activists that have left more than 40 people dead in the last three years.

Authorities have blamed homegrown extremists for the attacks, which have surged in recent weeks, rejecting claims of responsibility from the Islamic State (IS) group and a South Asia branch of al Qaeda.

The latest victim was a 70-year-old Hindu priest whose head was nearly severed.

Farmers discovered the body of Ananda Gopal Ganguly near his home in the village of Noldanga in the western district of Jhenidah after he had gone missing on his way to morning prayers.

Although there was no immediate claim of responsibility, investigators said the killing bore the hallmarks of recent attacks by religious extremists who have carried out 10 other similar killings in the last 10 weeks.

“He left home this morning saying that he was going to a Hindu house to offer prayers,” the district’s deputy police chief Gopinath Kanjilal told AFP.

“Later, farmers found his near-decapitated body in a rice field.

“We do not know the identity of the killers. His body was found in an isolated area and we do not believe there were any witnesses to the killing.

“But the pattern of the killing is similar to ones carried out by local Islamist militants in recent time,” Kanjilal added.

Although most of the recent attacks have been claimed by the IS or the local offshoot of al Qaeda, Prime Minister Sheikh Hasina’s government has blamed its domestic opponents for the attacks.

Speaking to AFP on Tuesday, Home Minister Asaduzzaman Khan again linked the main opposition Bangladesh Nationalist Party (BNP) to the attacks, saying they were part of a wider conspiracy that also involved Mossad.

“These killings are part of a national and international conspiracy. Those who are carrying out these incidents are communicating with Mossad,” Khan told AFP.

A senior BNP official was charged with sedition last month for allegedly plotting against the state when he met an Israeli government adviser.

Aslam Chowdhury, a joint secretary of the party, was arrested after local media reported he had met the adviser, Mendi Safadi, in India in March.

Jamaat is a traditional ally of the BNP whose leader, two-time former prime minister Khaleda Zia, is facing a series of charges in connection with deadly firebombings.

Victims of the recent murders by suspected extremists have included secular bloggers, gay rights activists and followers of minority religions.

Although it is officially secular, around 90 percent of Bangladesh’s 160 million-strong population is Muslim.