The case of the mysterious drone

The case of the mysterious drone

It seems that Mullah Mansou­r's was was left at the locati­on of drone strike to be found
By Shaukat Qadir
Published: June 4, 2016
Tweet Email 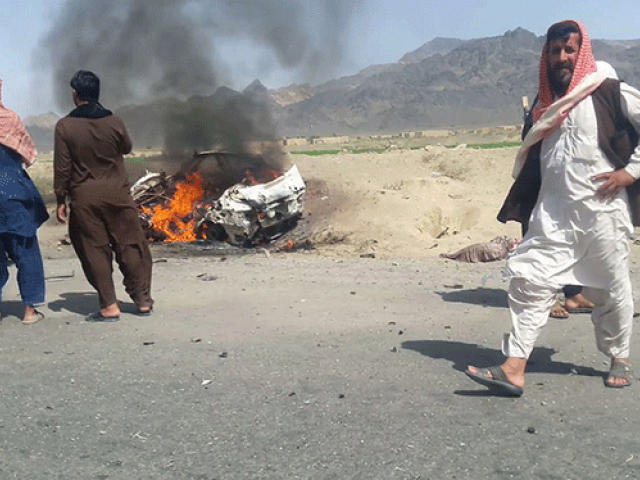 With the Taliban acknowledging that Mullah Mansoor — their last Emir Mullah Omar’s successor — died due to a drone attack close to Noshki, Maulvi Haibatullah, reputedly a non-combatant, has been hurriedly nominated by the Shura as his successor. When Mullah Omar’s death finally became public, there was considerable infighting among those competing to succeed him. Omar’s brother and son were among the competitors. Mansoor, however, had the reputation of being the least intractable and more amenable to talks.

With the Afghan Taliban splintering even while Omar’s death was not public, speedy action was necessary and, with the support of like-minded well-wishers, Mansoor was nominated by the then Shura.

Over time, Mansoor overcame those who continued to oppose him and, slowing the splintering, began reuniting the various groups of the Taliban. However, in order to do this, he was forced to take a harder line on peace talks. This was partially due to the inroads made by the hardest of hardliners, the Islamic State, in Afghanistan.

Consequently, Washington and Kabul began expressing their impatience to Islamabad. Despite numerous efforts to explain the reasons for Mansoor’s conduct and seeking more time, Washington decided to sign his death warrant.

Since the demise of the Soviet Union, the CIA appears to have lost any remaining vestige of human intelligence. Although unmatched in its technological ability, which provides it with an unparalleled and multi-faceted electronic intelligence, it has virtually no human intelligence of its own resource. For human intelligence or Humint, it has become dependent on cooperation of intelligence services of friendly countries, or on purchasing Humint from the market. For the latter, it frequently takes recourse to outsourcing to private security companies; the largest beneficiary of this outsourcing is the infamous company known as Blackwater or, more recently, XE.

The first drone strike by the US in Pakistan was in 2004 but drone operations actually picked up pace from 2008. The total number of drone strikes in Pakistan is estimated to be well over 400. Until May 21, when Mansoor was executed, not one had been in Balochistan. It is understood that whatever agreement that exists between the US and Pakistan since the Musharraf era, included the understanding that Balochistan would not be hit. This was a red line, but one that the US decided to cross. Its official version is that it was aware that Mansoor’s family was dwelling in Iran. Since it apparently lacked Humint support from the ISI in this venture, the US picked up the “electronic signature” of a “possibility”, when it left Kandahar and confirmed it to be Mansoor, when he reached the (known) location of his family.

Then the US stayed with the target till it crossed the Iran-Pakistan border and at an unpopulated spot, which was at a location where it might not be spotted quickly (in fact, some hours elapsed between the strike and its discovery), the target was “taken out”.

From my modest understanding of US electronic surveillance capabilities, this is not merely a plausible, but a very likely, accurate acknowledgement of what happened. Furthermore, after the army chief’s hard words to the US ambassador, I discount the possibility of duplicity in our government’s claim that it was unaware. When John Kerry claimed that the prime minister and the army chief “knew”, I take it that they were informed after the hit or while it was taking place. If this be so, two questions come to mind. First, why was it necessary for the hit to be executed in Balochistan? After all, it could have been equally effective in Iran or Afghanistan.

The only possible explanation that occurs to me is that the US had some points to make: a) that there were no longer any red lines for US drone strikes and, by extension b) that the security situation of Balochistan is no longer a US priority.

An amazing thing happened when this attack occurred. While everything and everybody in the vehicle was burnt beyond recognition, a new passport with a CNIC of the passport holder, Wali Muhammed by name but the photograph on it was that of Mansoor, fell a few yards away, intact and un-singed. The second question arises, therefore, how did that happen? A far-fetched possibility is that Mansoor was playing with it when the vehicle was hit and, in an unconscious gesture flung the passport out of the window of the (air-conditioned?) vehicle. I must admit, I broach that possibility with utmost scepticism. If this is not a real possibility, then the only alternative is that it was left there to be found. If it was left for that purpose, the only object of this that I can think of is to again malign Pakistan and its armed forces before the court of international and domestic opinion.

If Mansoor had a Pakistani CNIC, passport and a place of residence here, it puts Pakistan in a very awkward position before the entire world, but before Afghanistan most of all. When I was researching for my book on OBL’s assassination, I concluded that we were being subjected to a malicious propaganda campaign to malign the army in general and the duo of Generals Kayani and Pasha, in particular. I get the feeling that a similar thing may be afoot right now and that this may be the beginning of a propaganda campaign targeting our armed forces.

Moreover, I held the view that since last year, the US had ceased its hybrid war targeting Balochistan and I had hoped that our amity would last. I believe this attack puts paid to my last hopes from the US — the “enemy-who-allies-us-when-he-wants-to”.