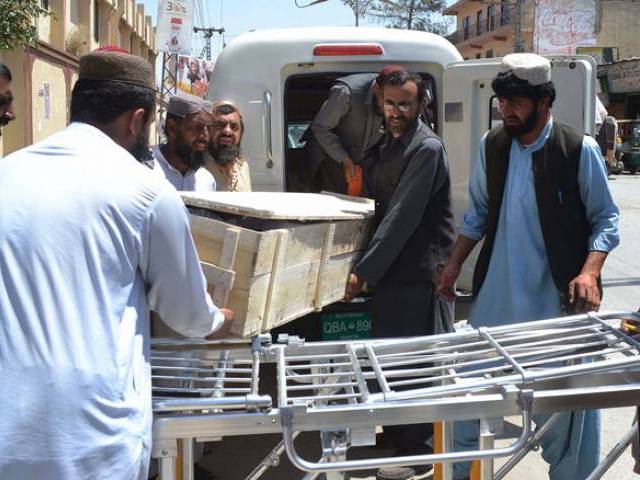 Security officials and hospital staff move a dead body into a morgue in Quetta on May 22, 2016. PHOTO: AFP

WASHINGTON / KABUL: The United States carried out an air strike on the leader of the Afghan Taliban, probably killing him in a remote area just inside the Pakistan border in an operation likely to sink any immediate prospect for peace talks.

If confirmed, the death of Mullah Akhtar Mansour may open up a battle for succession and deepen fractures that emerged in the insurgent movement after the death of its founder Mullah Mohammad Omar was confirmed last year, more than two years after he died.

Saturday’s mission, which US officials said was authorised by President Barack Obama and included multiple drones, showed the United States was prepared to go after the Taliban leadership in Pakistan, which the Western-backed government in Kabul has repeatedly accused of sheltering the insurgents.

It also underscored the belief among US commanders that under Mansour’s leadership, the Taliban have grown increasingly close to militant groups like al Qaeda, posing a direct threat to US security.

Pentagon spokesperson Peter Cook confirmed a strike targeting Mansour near the Afghanistan-Pakistan border region but declined to speculate on his fate.

“We are still assessing the results of the strike and will provide more information as it becomes available,” Cook said.

The Taliban have made no official reaction but attention has immediately focused on Mansour’s deputy, Sirajuddin Haqqani, leader of a notorious network blamed for most of the recent high profile suicide attacks in Kabul.

“Based purely on matters of hierarchy, he would be the favourite to succeed Mansour,” said Michael Kugelman, an analyst at the Woodrow Wilson Institute, a Washington-based think tank. “But when it comes to the Taliban, nothing is clear cut and meritocracy is never the norm,” he said.

Haqqani, appointed as number two after Mansour assumed control of the Taliban leadership last year, has generally been seen as an opponent of negotiations and if he does take over, prospects of negotiations are likely to recede further.

The Taliban are issuing routine statements about spring offensive but are neither denying or confirming the Pentagon’s claim. Their spokesman and the group’s other media persons did not respond to the queries of The Express Tribune.

Efforts to broker a new series of talks between the Afghan government and the Taliban had already stalled following a suicide attack in Kabul last month that killed 64 people and prompted President Ashraf Ghani to prioritize military operations over negotiations.

Afghan government Chief Executive Abdullah Abdullah issued the highest level confirmation on Sunday that Mansour had been killed
in an attack by US drones in Pakistan a day earlier.

#Taliban leader #AkhtarMansoor was killed in a drone strike in Quetta, #Pakistan at 04:30 pm yesterday. His car was attacked in Dahl Bandin.

“Taliban leader Akhtar Mansour was killed in a drone strike in Quetta, Pakistan, at 04:30 pm yesterday. His car was attacked
in Dahl Bandin,” Abdullah said in a tweet, referring to a
district in Balochistan just over the border
with Afghanistan.

Afghanistan’s main spy agency said on Sunday that Mansour was killed in a US drone attack inside Pakistan.

“Mansour was being closely monitored for a while… until he was targeted along with other fighters aboard a vehicle… in Balochistan,” the National Directorate of Security said in a statement.

US Secretary of State John Kerry said on Sunday leaders of both Pakistan and Afghanistan were notified of the air strike but he declined to elaborate on the timing of the notifications, which he said included a telephone call from him to Prime Minister Nawaz Sharif.

“Peace is what we want. Mansour was a threat to that effort and to bringing an end to the violence and suffering people of Afghanistan have endured for so many years now. He was also directly opposed to the peace negotiation and to the reconciliation process,” Kerry said.

“Yesterday, the United States conducted a precision air strike that targeted Taliban leader Mullah Mansour in a remote area of the Afghanistan-Pakistan border. Mansour posed a continuing, imminent threat” to US personnel and Afghans, Kerry told a news conference in the Myanmar capital.

“This action sends a clear message to the world that we will continue to stand with our Afghan partners as they work to build a more stable, united, secure and prosperous Afghanistan.”

“Peace is what we want. Mansour was a threat to that effort and to bringing an end to the violence and suffering people of Afghanistan have endured for so many years now. He was also directly opposed to the peace negotiation and to the reconciliation process,” Kerry said.

Afghan government Chief Executive Abdullah Abdullah said on Sunday the government had been informed by Washington that Mansour had been probably killed.

The US drones targeted Mansour and another combatant as they rode in a vehicle in a remote area of Balochistan, southwest of the town of Ahmad Wal, another US official said, speaking on condition of anonymity.

Residents of the area close to the Afghan border, which is often used by drug smugglers, said some people had heard a blast but that the cause was unclear.

US special operations forces operated the drones in a mission authorised by Obama that took place at about 6 am EDT (1000 GMT), the US official said. That would have been 3 pm on Saturday in Pakistan.

The Pakistani military did not respond to requests for comment but an intelligence official who declined be identified said there had been a strike in the area but he did not know the target and it happened on the Afghan side of the border.

Cook called Mansour “an obstacle to peace and reconciliation between the government of Afghanistan and the Taliban” and said he was involved in planning attacks that threatened US, Afghan and allied forces.

Confirmation from the Taliban, which kept the news of Mullah Omar’s death secret for more than two years before confirming it, may take some time. But one commander close to Mansour denied he was dead.

“We heard about these baseless reports but this not first time,” said the commander, who spoke on condition of anonymity. “Mullah Mansour has not been killed.”

In December, Mansour was reportedly wounded and possibly killed in a shootout at the house of another insurgent leader near Quetta. The Taliban eventually released an audio recording, purportedly from Mansour, to dispel the reports.

A US intelligence analyst said Mansour had been in a power struggle with Mullah Mohammad Rasoul, whose deputy, Mullah Dadullah, was killed late last year in what officials think was a fight with Mansour’s more hard-line faction.

But the US official cautioned against concluding that the shakeup might diminish the Taliban’s broader sense of strength, given political tension in Kabul and the uneven performance of US-backed Afghan forces in recent months.

“The Taliban have made considerable progress in Helmand (province) and elsewhere so it’s hard to see much incentive for them to start compromising now, with the fighting just heating up again,” the official said.

The new US commander in Afghanistan is reviewing US strategy, including whether broader powers are needed to target insurgents and whether to proceed with plans to reduce the number of US forces.

Top US commander for the Middle East visited Syria: Centcom