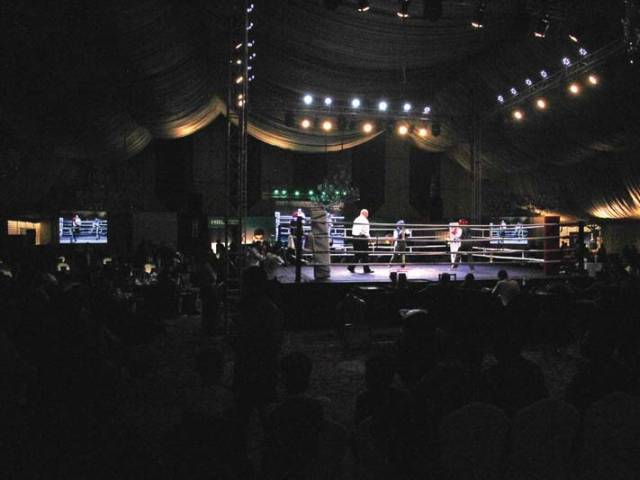 KARACHI: Pakistan got its first taste of professional boxing on Thursday night as boxing superstar Amir Khan successfully staged a boxing event at the Pearl Continental Hotel in Karachi.

Held under the auspices of the UK-based pugilist’s Amir Khan Trust and ratified by the British and Irish boxing authorities, the landmark international event had a cruiserweight and a middleweight bout featuring two pairs of British fighters.

In the first four-round pro bout of the night, Dayle Gallagher, an up and coming south paw out of Liverpool, defeated fellow middleweight Philip Townley on points, with the judges calling the fight 40-36 in Gallagher’s favour. With that win, the fledgling Gallagher extended his unbeaten winning streak to three.

Later on, in the main event, Stuart Maddox and Jody Meilke traded hard, crunching blows in front of an awestruck audience. After four rounds of relentless bashing, the exhausted Maddox led 39-36 on judges’ cards and was declared the winner.

Maddox was just as happy with the result as he was for his role in bringing pro boxing to Pakistan. “It is great to be in Pakistan,” Maddox told The Express Tribune. “It’s exciting to see all the people interested in boxing. I saw a lot of children very excited about this too.”

The 36-year-old nicknamed Mad Dog admitted that before coming to Pakistan he had his concerns, but they dissipated as soon as he landed in Karachi.

“I heard a few things about the situation here,” said Maddox. “I met all my friends and my children before coming here, and my eldest was a little worried too. But everything went fine, the security is good too.”

Stephen Speed, Maddox and Gallagher’s coach, was even more effusive in his praise for the way the management handled their security. “The security is unbelievable,” he said. “I’m here for Dayle and Maddox and it is a good event.”

Before the pros took the centre stage, the event also featured an exhibition match between U17 female boxers from Lyari.

“It was great. I love Amir Khan, and I still can’t believe we became a part of his event,” said Mehreen Zuma Jan who took on Sara Malang in the night’s only bout featuring local talent.

The event also doubled as a fundraiser for the benefit of drought-stricken people of Thar, with Amir’s sporting memorabilia fetching a sizable sum.