The boy did not look terrif­ied as he sat beside the massiv­e animal, shows footag­e
By News Desk / Reuters
Published: May 30, 2016
Tweet Email 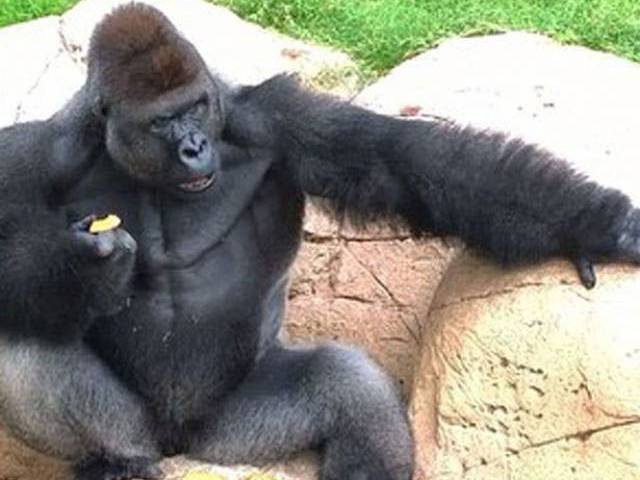 A gorilla that was killed over fears it was going to hurt a boy who fell into its sanctuary in an American zoo was actually protecting him, new footage of the incident has revealed.

Workers at Cincinnati Zoo in the US state of Ohio had shot and killed a gorilla after a three-year-old boy fell into its enclosure.

According to eyewitnesses, the animal, named Harambe, was not exhibiting any aggressive behavior towards the boy who had fallen 12 feet into the enclosure, reported the Mirror.

It was claimed that screams from the onlookers actually panicked the big animal and prompted him to drag the child at a quick speed through the water.

The footage also showed the boy too did not look terrified as he sat beside the massive animal.

US zoo kills gorilla after boy falls into enclosure

Meanwhile, more than 2,000 people signed a petition on Change.org that sharply criticised the Cincinnati Police Department and the zoo for putting down the animal.

It has called for the child’s parents to be “held accountable for their actions of not supervising their child,” Reuters reported.

Cincinnati police on Sunday said the parents had not been charged, but charges could eventually be sought by the Hamilton County Prosecuting Attorney.

Harambe, was a Western lowland gorilla, an endangered species, and the zoo said it had intended to use him for breeding.

Saving Namibia’s cheetahs: another female pioneer to the rescue

“If we think it’s acceptable to kill a gorilla who has done nothing wrong, I don’t think our city should have gorillas,” Manvinder Singh posted on the Facebook page, “Justice for Harambe” created after the incident.

A blog post on the website for People for the Ethical Treatment of Animals also questioned why it was necessary to kill the gorilla and whether zoos could meet the needs of such animals.

“A 17-year-old gorilla named Harambe is dead, and a child is in the hospital. Why?” blogger Jennifer O’Connor wrote. “Western lowland gorillas are gentle animals. They don’t attack unless they’re provoked.”

At other US zoos, similar encounters have ended in tragedy, including the 2013 fatal mauling of a two-year-old boy by a pack of wild African dogs after he fell into an exhibit at the Pittsburgh Zoo and PPG Aquarium.

A man who in 2012 jumped into an enclosure at New York’s Bronx Zoo to be “one with the tiger” suffered bite wounds and other injuries but survived.

But there was a happy ending when a three-year-old boy fell into the gorilla den at Brookfield Zoo near Chicago in 1996, and an eight-year-old female gorilla named Binti Jua picked up the unconscious boy and protected him from the other primates.

The act of kindness won Binti Jua national attention as Newsweek‘s Hero of the Year and one of People’s most intriguing people.