Pair was import­ed to city zoo from Canada in 2011
By Our Correspondent / Photo: Athar Khan
Published: May 1, 2016
Tweet Email 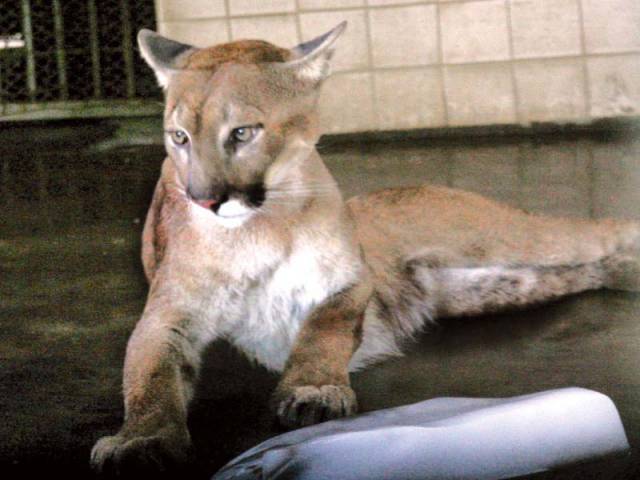 Zuri [in the picture] and Perci, were born to Vinee and Cuba in 2013 and 2014, respectively. They have now been joined by three siblings. PHOTO: ATHAR KHAN/EXPRESS

KARACHI: The birth of three cubs at the Karachi Zoological Garden on Friday cheered the staff mourning the demise of the 16-year-old Bengal tiger the same day.

According to Karachi zoo deputy director Abida Raees, the female cougar, named Vinee, was in labour for around ten hours. The staff decided to let Vinee give birth naturally despite the long labour period, informed the chief security guard of the zoo, Suleman Sajjad.

“The mother and young ones are fine now,” said Raees, adding that the entire staff got excited after the arrival of the three cubs.

The cubs cuddled their mother with their eyes closed while Vinee was licking their heads, the moment was captured in a video recorded by Sajjad on his mobile phone just after Vinee gave birth.

Vinee has been separated from her male counterpart, Cuba, said Raees adding that they wanted the female puma to devote all her attention to the cubs. “If we would have left Cuba in the cage too it would have affected the cubs,” she explained.

Vinee and Cuba were brought to Karachi zoo from Canada in 2011, said Raees. The two already have two cubs, Zuri and Perci, who were born in 2013 and 2014 respectively.

Perci and Zuri have also been caged in a separate enclosure as they are approaching the age of mating. However, Zuri is still quiet young to give birth, said Raees. “After three years, mountain lions mature enough to breed,” she explained.

The zoo needs more enclosures to accommodate the puma family, she said, adding that in this regard a summary has been sent to the government.

The genders of the cubs are yet to be confirmed as no caretaker has dared to step inside the cage, explained Raees. Their cage is covered with a piece of jute from all sides to protect Vinee and the cubs from heat and visitors. Ice blocks have also been placed inside the cage

After 15 days, the cubs will open their eyes and the jute surrounding the cage would then be removed, said Sajjad.