Saving Namibia's cheetahs: another female pioneer to the rescue

Saving Namibia's cheetahs: another female pioneer to the rescue 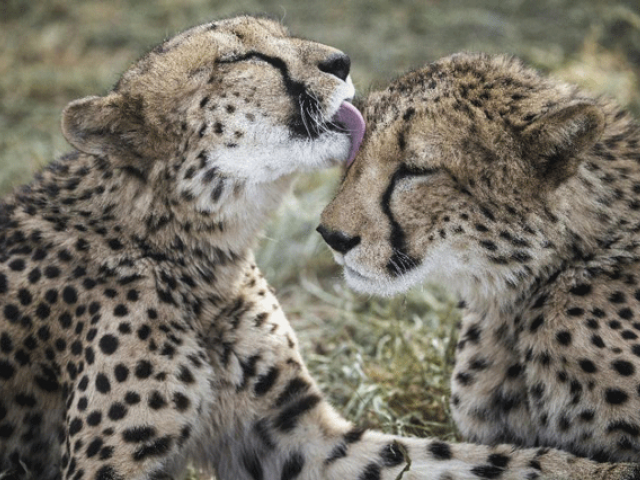 A cheetah licks her sibling in an enclosure at the Cheetah Conservation Fund in Otjiwarongo, Namibia. PHOTO: AFP

OTJIWARONGO, NAMIBIA: Laurie Marker has no doubts about the future of the big cat with the black spots. “Cheetahs are vulnerable, and their survival is in our hands.”

The 62-year-old American living in Namibia since 1991 has devoted her life to saving the fastest land animal on earth, with a top speed of 70 miles (110 kilometres) per hour.

Laurie Marker, founder of the Cheetah Conservation Fund, has created programs that address the threats both to the cheetah and its entire ecosystem, including human populations. PHOTO: AFP

Marker has been compared to Jane Goodall and the late Dian Fossey — defenders of chimpanzees and gorillas — who were the first generation of iconic female pioneers of wildlife conservation in Africa.

When Marker first visited Namibia on the southwest coast of Africa nearly 40 years ago, she was shocked to discover farmers were mercilessly killing the graceful sprinter of the plains.

A century ago, there were 100,000 cheetahs across Africa, the Middle East and into India. Now, less then 12,000 remain in the wild, all in Africa, except for a tiny population of less than 100 in Iran.

The Cheetah Conservation Fund in Otjiwarongo, Namibia, founded by Laurie Marker in 1990, is dedicated to saving the cheetah in the wild. PHOTO: AFP

The rapid decline of the cheetahs could have been sharper without Marker’s high-profile tireless efforts. A formidable campaigner and acknowledged world expert, she founded the Cheetah Conservation Fund (CCF) in 1990.

She saw her first when she was 20 and went to work at a wildlife park in the US state of Oregon. “It was one of the few places in the world that had cheetahs. They had come from Namibia and they fascinated me,” she recalled.

“I wanted to know everything about them, but the more questions I asked people would say ‘Hmm, we don’t know much about them, if you find out something, let us know’.”

A livestock guarding Anatolian sheperd dogs looks after goats and sheep on a farm on the outskirts of Otjiwarongo, Namibia, to prevent cheetahs and other big predators from getting close. PHOTO: AFP

Marker raised an orphaned female cheetah cub named Khayam in Oregon and, in 1977, took Khayam to Namibia, then known as South-West Africa.

She planned to see if the young cheetah could be taught to hunt for prey as part of research into whether captive cheetahs could be re-introduced into the wild.

But soon after her arrival, she learnt about a more immediate emergency — farmers were poisoning, trapping and shooting huge numbers of cheetahs. “What I found out is that farmers were killing cheetahs like flies,” she said, estimating that 800 or 900 were killed each year at the time.

“Farmers would tell me ‘We hate cheetahs. What are you doing with these animals?’ They told me to take them all and go away!”

Namibian farmers continue to kill cheetahs because they threaten valuable livestock, while poachers steal cheetah cubs from their mothers to sell as pets to wealthy clients, particularly in the Middle East.

The threat has driven Marker on a decades-long effort to halt poaching and persuade farmers that a balance can be struck between raising livestock and protecting wildlife. She has led academic study into the cheetah since the 1970s, and completed a zoology doctorate at Cambridge University in 2002.

Even now she spends much of the time travelling the world, giving lectures and raising funds for her cheetah conservation work. “The thing about Laurie is she doesn’t know the meaning of the word ‘no’,” said Anne Schmidt-Küntzel, a geneticist who works for CCF.

Marker says she has slowly managed to change attitudes through a mixture of knowledge, charm and determination.

“At first I was kind of a problem, (but) I started bringing different solutions like dogs that guard livestock, good herd management, and training programmes,” she said. “The more I told them about cheetahs, the more they were listening.

“I’d tell them they’re lucky to have cheetahs in their backyard, and I would acknowledge it can be a problem due to human-wildlife conflict.”

The most effective tactic for protecting livestock has proven to be introducing large Anatolian shepherd dogs that live permanently with the cattle.

Wild predators like cheetahs are reluctant to take on the fierce canines, and so they return to hunting antelope in the bush. But Marker knows that the cheetahs are still under severe threat and will always be a difficult animal to save because they struggle even in the biggest reserves.

A cheetah lacks the power of a lion, hyena or leopard and, where animal densities are higher and competition is tough, cub mortality can be as high as 90 per cent.

“Namibia and the farming community here has become a model,” said Marker. “Now young farmers want training about how to live with cheetahs.

“Most of our wildlife is outside protected areas, so it is the farmers who are the stewards. I don’t just say ‘Love cheetahs’. I say ‘Let’s learn to live together’.”