The world as I see it: Four artists, four different perspectives

The world as I see it: Four artists, four different perspectives 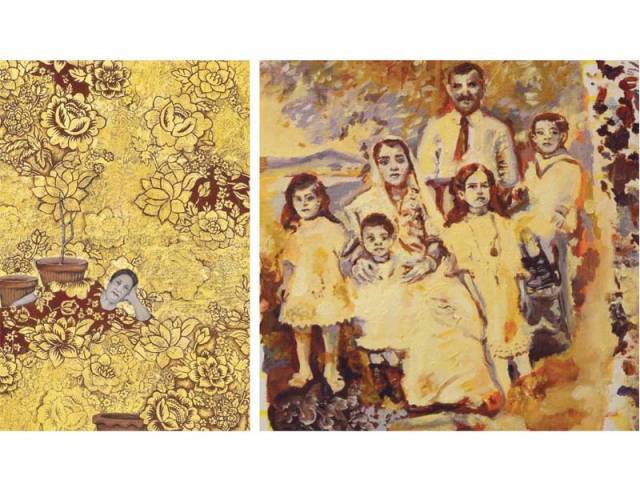 The artists portrayed subjects close to their hearts in their work, depicting their families, identities and thoughts. PHOTOS: COURTESY CANVAS GALLERY

KARACHI: Four emerging artists are showcasing their works on subjects close to their hearts at Canvas Gallery. Titled, ‘Figuratively Speaking,’ the show displays the artists’ perceptions of the world around them, as well as how they view their identity in terms of that perception.

For instance, Heraa Khan showcased her observations of the ways of the socialites of Lahore. By using gold leaves and gouache on wasli paper, she captured the glitz and glamour that the elite class surrounds itself in, both at parties and in their day-to-day lives.

While the primary treatment is of gold, to show the vibrancy of this life, Khan has used blues and purples to introduce different moods to express her take on stereotyping.

For example, a purple background where a woman is getting dolled up, while a blue one is used when she is at a birthday party; it is hard to miss the underlying humour and mockery in her work.

In her statement, the artist mentions the use of flowers and patterns as a means of expressing people’s consumer-ridden lifestyles.

“My work is not only relevant to a particular segment of Pakistani society but it strives to go beyond borders as well. It’s a tale of frivolous indulgences as well as limitations and loneliness,” she says in her statement, adding that her work is also about experimenting and expanding the definition of miniature and its age-old techniques.

Syed Hussain’s display, on the other hand, is extremely personalised, as he explores and questions his Hazara identity.

He has repainted old family photographs of small children and passport photos of family members with their facial expressions and eyes hidden in the photographs. One particular piece is titled ‘Shinasnama’ and features a 16-year-old boy, his face whitened and blank on a school identity card. In his statement, the artist says that one of the biggest challenges he faces is of what not to paint rather than the other way around. “My intention is not only in replicating these documents but to raise the question of my identity,” he said. “The spaces left untouched are the questions.”

Along the same lines of Hussain’s work, Veera Rustomji has explored her familial identity spread around different geographical locations such as China, Singapore and South Africa. Rustomji’s main inspirations were 20 family photo albums, which she used to connect the dots and make sense of them beyond borders. The fourth artist, Umar Nawaz, made what appeared to be an iron pillar, broken from one end. According to the artist, his idea is based on the treatment of the material used in the installation.

The exhibition is open for display at Canvas Gallery till June 2.