The arms sales decisi­on 'was not based on China', Obama says, but part of normal­ising ties with the ex-enemy
By AFP
Published: May 24, 2016
Tweet Email 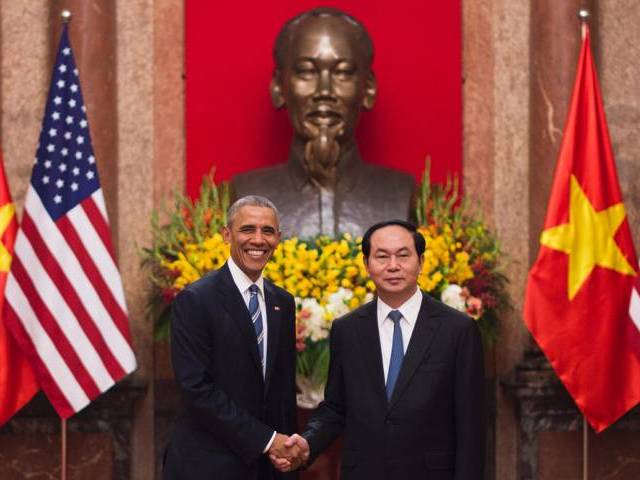 US President Barack Obama (L) shakes hands with Vietnamese President Tran Dai Quang during his visit to the Presidential Palace in Hanoi on May 23, 2016. Obama was to meet communist Vietnam's senior leaders on May 23, kicking off a landmark visit that caps two decades of post-war rapprochement, as both countries look to push trade and check Beijing's growing assertiveness in the South China Sea. AFP PHOTO

BEIJING: Chinese state media on Tuesday slammed the lifting of a decades-old US arms embargo against Vietnam, saying the move was aimed at Beijing and calling Barack Obama’s assurances to the contrary “a very poor lie”.

Obama announced the end of the 41-year-old ban on weapons sales to the United States’ former foe in Hanoi on Monday, as Washington and Beijing jockey for influence in Asia and tensions mount in the strategically important South China Sea.

Beijing is taking an increasingly assertive stance in the area, building up artificial islands with facilities capable of military use, while Washington has responded with “freedom of navigation” sail-bys and fly-pasts.

Beijing claims almost the whole of the sea, while several of its neighbours have conflicting claims, including Vietnam.

The arms sales decision “was not based on China”, Obama said, but part of normalising ties with the ex-enemy.

China’s Global Times newspaper, which is close to the ruling Communist party, retorted Tuesday that the comment was “a very poor lie” and exacerbated “the strategic antagonism between Washington and Beijing”.

Washington’s “ultimate goal” was to cement US dominance in the area, it said, and it was “taking advantage of Vietnam to stir up more troubles in the South China Sea”.

Similarly the Trans-Pacific Partnership trade agreement, which includes Vietnam but not China, was one of “three nets that the US is knitting around China — ideology, security, economy and trade”, it said.

The lifting of the embargo will have come as a surprise to the paper, which on Monday confidently declared that such a move “obviously cannot be achieved”.

The stance was echoed on the front page of the China Daily, which is published by the government and whose front-page headline said the US was charting a “clear course aimed at containing China”.

Obama confident TPP deal can be ratified in US

In an editorial, the paper said that the move risked “turning the region into a tinderbox of conflicts”.

“The former bitter foes have turned into friends and are seeking to boost their commercial, military and political relations,” it said, adding the move showed “there are no eternal allies or perpetual enemies, only eternal and perpetual interests”.