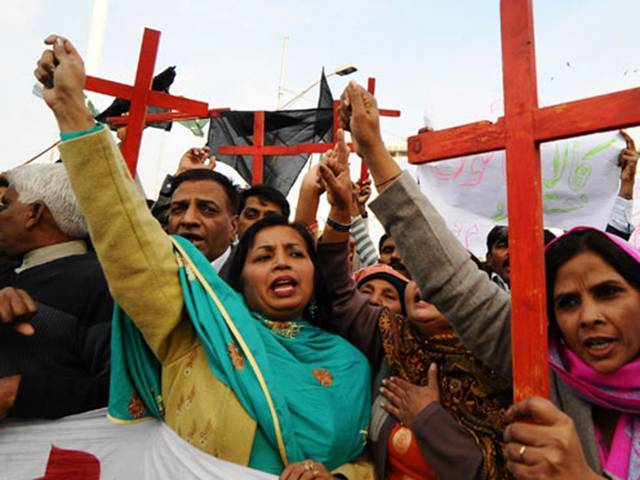 LAHORE: A Gujrat-based Christian family is on the verge of having blasphemy charges pressed against it after reportedly dining on a panaflex banner, The Express Tribune has learnt.

A local prayer leader and his followers have been pestering police to register an FIR against the family claiming that the name of the Holy Prophet (PBUH) was inscribed on the banner used by the Christians to dine on. Disputing the claim, police say the banner—which has been recovered from the family—only features pictures of local politicians.

Police have been striving to lay the matter to a rest by having the family placate the prayer leader and his followers by assuring them that they have not blasphemed. The prayer leader—on the other hand—has asked some Muslim residents to vouch on behalf of the family.

Rights activist Khalid Shahzad told The Express Tribune that Christian Colony resident Shaukat Masih was eating with his family when a Muslim neighbour had come to visit them. He said she had later returned and asked for the banner to be handed over to her. Shahzad said Masih’s wife failed to comprehend the gravity of the situation and refused to handover the banner.

He said the woman had then approached her husband who had in turn informed the prayer leader. The rights activist said the prayer leader had managed to organise a protest demonstration after becoming cognisant of the matter. Shahzad said the timely intervention of some other Christians—who alerted police—prevented any untoward incident from taking place.

Garhi Ahmadabad Police Post In-charge Muhammad Arif, an SI, told The Express Tribune that the prayer leader had approached them to register an FIR against the family. He said police had been striving to amicably resolve the matter but would have no option but to register a complaint against the family if it failed to placate the prayer leader and his followers. Arif said the family had already begged pardon despite being “innocent.”

Subsidy: 12 Ramazan bazaars to be set up in Bahawalpur