The hit TV serial was issued a show-cause notice for showin­g "immora­l" conten­t
By Entertainment Desk
Published: May 18, 2016
Tweet Email 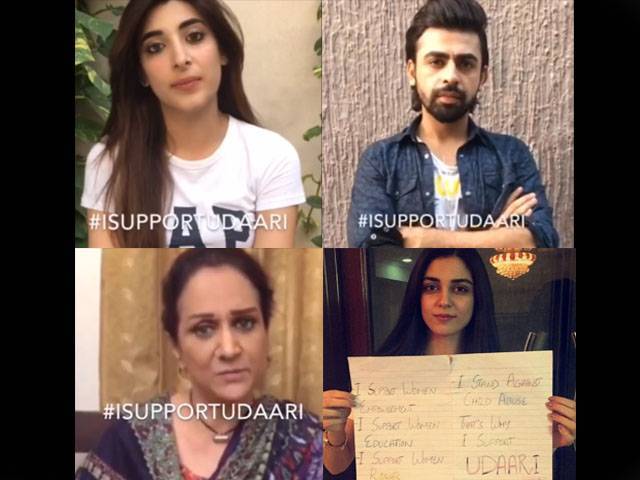 The hit TV serial was issued a show-cause notice for showing "immoral" content.

While producer Momina Duraid and lead actor Ahsan Khan have showed their concern over Pemra’s move, a number of other celebrities have also taken to social media to extend their support for the hit Hum TV serial.

The lead cast including Bushra Ansari, Urwa Hocane and Farhan Saeed, as well as Oscar-winning filmmaker Sharmeen Obaid Chinoy are among the many supporters who have raised their voice against Pemra’s criticism of Udaari for highlighting the issue of child abuse.

Here’s what they had to say.

Urwa, who is playing the role of Meera defines “immoral.”

Farhan, who stars as Arsh, says it shouldn’t hurt to be a child

Veteran actor Bushra Ansari, who has earned praise for her performance as Sheedan, says the serial highlights the issue in a subtle way and needs to be supported

Hate speech on tv is not obscene but talking about real issues that makes people uncomfortable is: https://t.co/6OUsgPdwkk #ISupportUdaari

“I am a mother of two and I am against child abuse. But if we want to stop it, we have to work together and that in the same language,” says model Fia Khan.

“It is based on a social cause and we should create awareness in our society through such drama serials,” says TV actor Yumna Zaidi.

Violence against women and child abuse are crimes against humanity. Justice can't prevail till we stand up against both. #Isupportudaari

Hello, this is pakistan, we cant stop sexual harassment, child abuse, and rape, but dont worry we can ban dramas and films. #ISupportUdaari

I can name tens of dramas, in the recent past, that glorified domestic abuse & misogyny- no action or petition against them. #ISupportUdaari

Children doesn't speak to their parents abt being abused b/c they're sacared, Parents needs to be more understanding & frank#IsupportUdaari

Isn't Kasur enough for us to open our eyes and accept that child sexual abuse is rampant?#ISupportUdaari