Political musings: Abida recalls her experience as ambassador to US

Political musings: Abida recalls her experience as ambassador to US

Claims the Americ­ans offere­d her bribes in connec­tion with an F-16 deal
By Irfan Ghauri
Published: May 16, 2016
Tweet Email 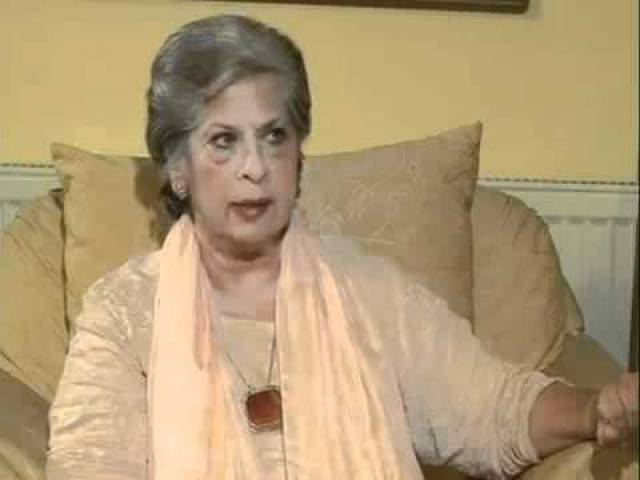 ISLAMABAD: Reminiscing about her experience as ambassador to the United States in 1991 when the capricious Islamabad-Washington relations were going through a rough patch, Syeda Abida Hussain recalls how ‘rough and unforgiving’ US officials pressurised Pakistan to restrict its nuclear programme.

In her autobiography, “Power Failure: The Political Odyssey of Pakistani Women,” she has chronicled many events from her personal and political life, some during her stint as an ambassador to US between 1991 and 1993.

One of the interesting events mentioned in her book is a meeting between the then army chief General Asif Nawaz Janjua and US Defence Secretary Dick Cheney in Pentagon.

Cheney had asked to speak alone with Janjua, and told him that Nawaz Sharif was not indispensable as prime minister and that the US would support a military takeover if they rolled back the nuclear programme.

In an interview with The Express Tribune, Abida shares some more interesting events, including the alleged attempt by the US officials to bribe her in order to continue payments for the F-16, which were not being delivered to Pakistan because of sanctions imposed through Pressler Amendment.

“The conversations in the offices with US functionaries and with US representatives were quite rough. Because they would make only one demand – ‘Roll back your nuclear programme’. And, since I was quite clear that we can’t do that, our conversations were not friendly,” she recalled.

She said it would be wrong to say the US officials threatened her but they used harsh language. “No, they did not try to threaten me. They were very harsh in their language and very uncompromising.”

“I toughed it out and I tried to be civil but firm. I would say, “No, the whole nation is united. We are not going to roll back our nuclear programme,” she added.

These conversations were coming from the highest level of the US administration. “From secretary of state to deputy secretary, to director, right to desk officer and the national security council.  They were unsparing”.

When she recommended that Pakistan cancel their contract for F-16 jets and get the money refunded, she was offered a bribe to continue paying the money till the end of the contract.

“I was accompanied by our air attaché Air Commodore Shahid. I was shown around the factory. You see a bar of steel enter and you see an F-16 roll out. It was an impressive factory visit,” she said.

“Then I was taken to the boardroom. One of the persons sitting took commodore Shahid out of the room. And the chairman of the board said, “You have two daughters studying in Harvard which is a very expensive school. Could we help you out with their education?”

She said she turned down the offer saying both of her daughters had grants and she did not need any help. “Then they said, you come from a country which is insecure, so why don’t you buy a house and we will help you buy one in Washington. You can rent it out and if you ever need it.

I looked at them and said, “I am person with very modest needs. My grandmother lived in a mud hut with a buffalo in the courtyard and if push comes to shove, I will go back and live in a mud hut as well. I don’t need a house in Washington”.

In response they said they were happy to meet a Pakistani at last who has modest needs.

“Washington is a very social town and socially the people were very friendly with me,” she said. “There were two women who supported her –Washington Post’s owner Katharine Meyer Graham and Pamela Beryl Harriman.”

“Graham also owned Loss Angels Times, she had one-fourth share in New York Times and she owned Herald Tribune, she owned CBS channel. So she was a power house. She was very kind to me”.

Talking about Pamela Beryl Harriman, Hussain said: “She was a great supporter of Bill Clinton. When Clinton was elected as president I was there. He appointed her an ambassador to France.

“She was socially very sought after. Everybody was very happy to be at her table. This was my personal network. In a way they socially launched me in Washington”.