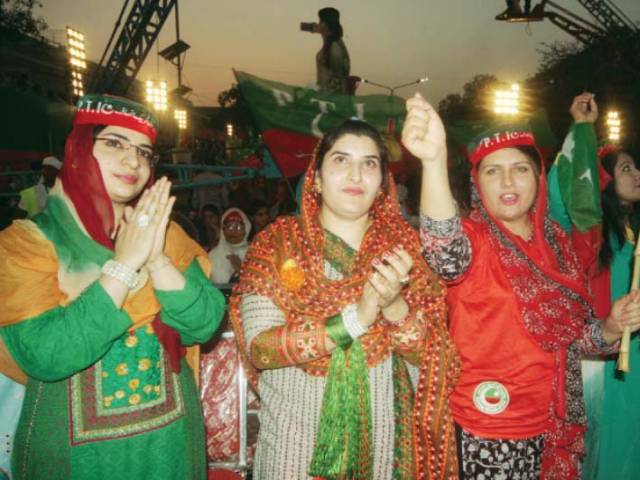 The Pakistan Tehrik-i-Insaf (PTI) staged a show on The Mall on Sunday to increase pressure on the government with regard to the Panama Papers scandal.

A large number of people attended the public rally at Charing Cross despite the government and law enforcement agencies having issued security warnings to the PTI leadership and disapproving the venue for the purpose.

A huge stage had been set up in front of the Provincial Assembly and thousands of chaired placed for the participants. The rally, scheduled to start at 5pm, was delayed owing to the scorching heat; temperature in the City was 43 degree Celsius on Sunday.

In view of the harsh weather, the organisers had asked party workers and supporters not to bring children to the rally. Still, a large number of families, including children, were seen at the processions.

A few thousand people had reached the venue until 6pm. The number went up with the drop in mercury. A majority of the participants were youngsters. They included a good number of youth from Khyber Pakhtunkhwa (KP).

Speaking to The Express Tribune, Afzal Khan, a university student from KP, said Imran Khan and his party had changed the fate of KP. “People in the province are satisfied with the PTI’s performance,” said Khan who had come to the rally with his friends.

“We have come here to achieve a corruption-free Pakistan. We support Imran Khan’s demand for a transparent investigation into the Panama Papers allegations,” he said.

Matiullah said he had come to the rally from Bajaur Agency. “I believe that Imran Khan is the only hope… he can help Pakistan earn respect in the comity of nations.”

Mudassar A Chaudhry, a British-Pakistani, said he had rescheduled his visit to Pakistan from April 27 to May 2 only for the rally. “Overseas Pakistanis are always worried about the country’s future. We hear negative news about our country almost every day but we always pray for a prosperous Pakistan. It is our motherland and we have to come back here one day.”

Chaudhry said he, too, believed that Imran Khan was the only hope for Pakistanis. “He wants a change,” he said.

Following an unpleasant incident during the PTI rally in Islamabad on its 20th anniversary, the PTI had made separate entry- and- exit points and sitting arrangements for men and women supporters in Lahore.

Male participants were allowed to enter the venue from the Lahore High Court chowk and Safanawala chowk. Families and women were allowed entry from Lawrence Road. Party leaders were allowed the entry from the Governor’s House side. A big screen had been installed at Queens Road to show Imran Khan’s live speech.

City police had cordoned off the venue by placing containers and barbed wires on roads leading to area. A three-tier security was in place – the participants were frisked through walkthrough gates, metal detectors and by security officials.

Several squads of Elite Force and Quick Response Force (QRF) were on patrol. CCPO Amin Wains and Operations DIG Haider Ashraf inspected the security arrangements. More than 5,000 police officials had been deployed on the occasion. A Command and Control Centre at the DIG office monitored the security measures, police said