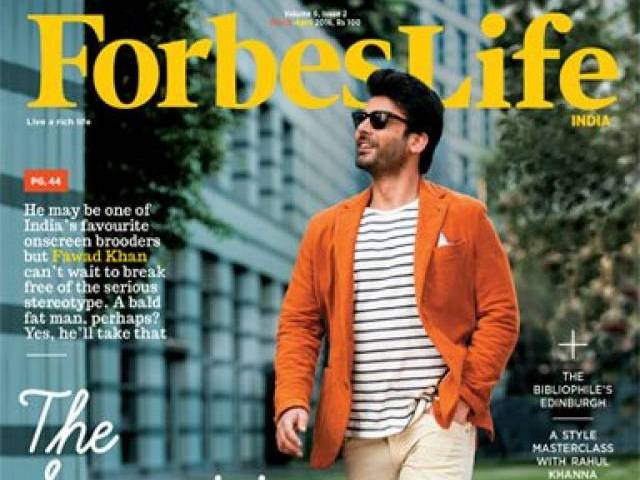 Did you know Fawad wants to play a bald, fat man?

Following the success of Kapoor & Sons, Pakistani heartthrob Fawad Khan has become a force to be reckoned with in India. Even Forbes India couldn’t help but take notice of the talented actor, and has put him on the cover of this month’s issue of ForbesLife.

In an in-depth interview with Forbes India, the Humsafar star revealed all about his past, his present, and future aspirations, as well as his introverted self that the actor is trying desperately to loosen up.

“You see, I didn’t have many friends growing up. I was quite an introvert. That changed, not much, but now I feel I am a little more out there. Ab mujhe hichkichahat kam hoti hai.”

In the tell-all interview, Fawad revealed that one of the ways in which he tries to loosen up is by trying new things in front of the mirror.

“I won’t shy away from saying that I try new things in front of the mirror,” he tells me. “I do very silly stuff in the bathroom, in my private moments. I have now started to use this on sets too. I have started loosening up. Thoda besharam hona zaroori hai; you have to try everything. If something works, it works. If not, then you have that bond, that trust, with your director, that he won’t use it.”

The star also thrives on roles that allow him to experiment with new looks. Fawad refers to his ad in Pakistan for Oye Hoye Chips, in which he plays the eccentric and mildly psychotic Oochi. “I’ve done a bit of a Borat, or at least I think so. And it’s weirder than what you are thinking. It’s a character that I have invented for an ad. This is what really turns me on, to actually be able to try out various looks.”

He won’t stop at just Oochi however. To everyone’s surprise (especially his stylist), Fawad reveals that he would love to play a bald, fat, man.

“I love experimenting with looks. I would love to play a bald, fat man,” he says, erupting in loud laughter even as his stylist, standing at some distance, drops her jaw. “She’s probably wondering how she would style me,” he grins. As always, Fawad couldn’t miss an opportunity to croon about his wife, Sadaf. During the interview, he reveals that acting was never his first choice, and about a decade ago Fawad was on the verge on quitting, to pursue a nine to five desk job, instead.

His love for his wife gave him the determination he needed to make something of himself.

“I was madly in love, and my wife was saying that it might be difficult for my father to accept you as an actor because all you are doing is over-the-top comedy. No one was taking me seriously. I was jobless—I needed money, so I became an actor.”

What is Kabir Khan doing in Karachi?