Only throug­h dedica­ted work and focus can Pakist­an dream of coming somewh­ere close of its glorio­us past in the sport
By Emmad Hameed
Published: April 10, 2016
Tweet Email 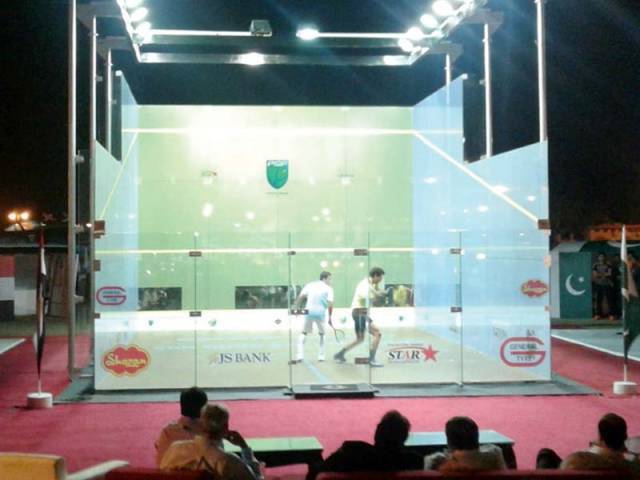 This file picture shows the Legends v Champions match under way between Pakistan’s Asim Khan and Egypt’s Ali Farag on the opening day of the event at the PAF Museum. PHOTO: FILE

In a cricket-mad nation where the bat and ball has hogged all the limelight there is to offer, other sports and sportspersons have been reduced to nothing but a life of obscurity and meagre returns.

Nearly 22 years ago, Pakistan simultaneously held world titles in cricket, hockey, squash and amateur snooker. But hockey and squash have had a free fall ever since and other than rare wins, the fortunes of these sports have taken a massive hit.

The new generation has seemingly lost track with squash and hockey — two sports primarily responsible for sustained success and a surfeit of world titles for nearly five decades.

If sporting achievements are narrowed down, then a single family arguably outweighs the achievements of the rest of the country — Nawakali’s Squash Khans.

The family produced no less than seven world champions but their hold on squash has well and truly slipped out of their hands after Jansher Khan hung his racquet at the turn of the millennium.

Slowly and gradually squash has been confined to the inner pages of Pakistan newspapers, while the TV channels have rarely bothered to report on the sport other than the odd story.

But after years of uncertainty, ego battles between the legends and the Pakistan Squash Federation (PSF), disharmony among the current players and coaches, a collective effort is under way to revive the sport dubbed by many as the heritage of Pakistan.

In the first major step in this direction, the PSF succeeded in inviting five Egyptian players for a two-day squash event in the once hub of the sport, Karachi.

For the first time a portable four-walled glass squash court was installed in the city. These courts are the latest innovation in squash which has given a new dimension to the sport with the possibility of staging events at any scenic location anywhere in the world.

The PAF Museum was used as the venue for the two day ‘Legends v Champions’ series spread over five games in the backdrop of fighter aircrafts.

In the last year or so the national players have had to endure major slump in their international rankings due to scant opportunities and exposure at the highest level.

The challenging security situation in the country meant that only Islamabad could stage high profile international events but after considerable efforts, the PSF has succeeded in staging an event in Karachi.

A lot of work needs to be done to sustain the momentum that the Legends vs Champions series provided in Karachi, only through dedicated work and focus can Pakistan dream of coming somewhere close of its glorious past in the sport.