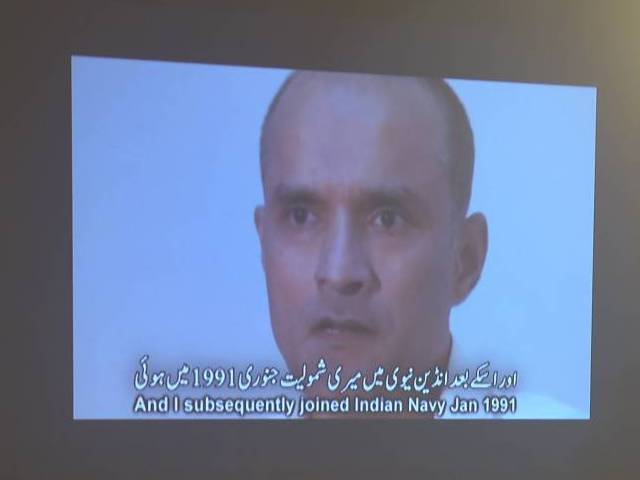 Days after an Indian ‘spy’ was detained in Balochistan, the military and government released a six-minute video of the Indian naval officer confessing to RAW’s involvement in the country, especially Balochistan.

“He converted to Islam and worked at Gadani under the cover of a scrap dealer,” said Gen Bajwa, terming his detention a ‘big achievement’.

“Pakistan and Balochistan’s maps were recovered from Yadav’s possession. He used to establish a network of operatives, provide funds, arrange and smuggle people for terrorism in the country,” Bajwa claimed. DG ISPR Asim Bajwa along with Information Minister Pervez Minister speaks with media representatives as he gives details of arrested man Kulbhushan Yadav, suspected of being an Indian spy, during a press conference in Islamabad on March 29, 2016. PHOTO: AFP

The DG ISPR added the Indian spy, who worked under the name Hussain Mubarak Patel, was tasked with carrying out bomb blasts, disrupt the China-Pakistan Economic Corridor, plan attacks in Karachi and work against efforts of Balochistan reconciliation.

“Yadav also had a link in the assassination of former SSP CID Chaudhry Aslam, said Bajwa,” adding the Indian agent, apprehended in the first week of March, will be prosecuted under the law of the land.

Meanwhile, Rashid said Pakistan had fulfilled its responsibility by conveying the news of Yadav’s arrest to Indian ambassador.

Islamabad and the Balochistan government have long accused RAW and Afghan intelligence of funding and training Baloch insurgents, who have been targeting security forces and pro-government personalities in the province for the past 10 years.

Security forces have stepped up operations in the violence-wracked Balochistan province since the announcement of the National Action Plan against terrorism in December 2014.

The province has been in the throes of a low-key insurgency since 2004, which became deadlier after the killing of Baloch chieftain Nawab Akbar Bugti in 2006.