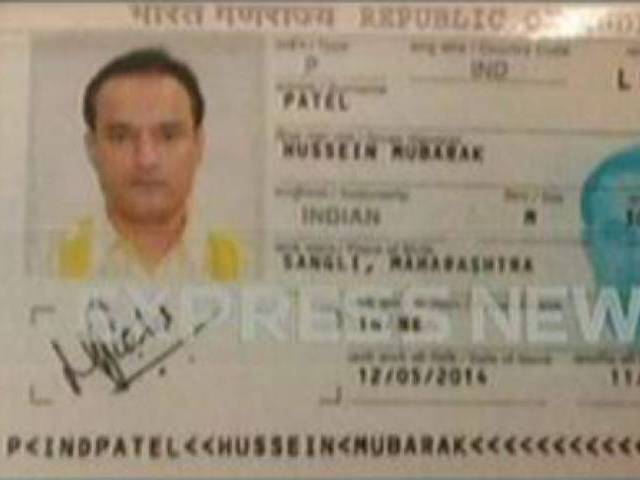 Kulbhushan Jadhav alias Hussein Mubarak Patel is a man the Indian media has been looking for. The arrested Indian citizen personifies counter-terror policy of Ajit Kumar Doval, India’s National Security Advisor and a proud spymaster. For the opposition parties, Kulbhushan offers a good reason to attack Modi government’s handling of the case.

Facts of the case remain that the man was found living with his wife, a son and a daughter with a genuine Indian passport but with a fake name, Hussein Mubarak Patel. Moreover, he was in possession of multiple identities. He was arrested from Chaman near Quetta.

His Indian passport with valid Iranian visa bears the number L9630722 while his residential address is said to be No 502B Silver Oak, Powai, Hiranandani Gardens. The Indian Express has confirmed the address to be correct.

The Iranians have not claimed that Kulbhushan’s visa as Hussein is fake. When asked to comment during his solo press conference, Iranian President Hassan Rouhani denied the issue of RAW activities in Iranian Balochistan against Pakistan. Clearly, the visiting Iranian leader was taken off guard and embarrassed. However, the insult to injury worsened when Pakistani military asserted that the matter was on the table during the COAS meeting.

No media person is allowed to enter the seven-storeyed Powai building that is being constantly watched by plain clothed men from the Indian intelligence agency, especially the Detection Branch. Kulbhushan’s parents and family have been residing there for over two decades. Interestingly, his father Sudhir Jadhav has not pleaded son’s innocence in a press conference since Islamabad announced the arrest. Sudhir remains inaccessible.

Times of India quoted a former assistant commissioner of police in Mumbai Subhas Yadav that the picture on the passport seized by Pakistan was that of his nephew Kulbhushan Jadhav.

Pakistani investigators believe that the man joined RAW in 2013 while Delhi admitted that he was commander (equivalent to lieutenant colonel) of Indian Navy who had opted to retire prematurely. To many, there could not have been a better cover story from the Indian side emerging many hours after Pakistan summoned its high commissioner Gautam Bambawale.

Pakistan claimed that the man was running a terrorist financing and training network and used to operate from Chabahar in Iran, Makran in Pakistan and adjoining districts of Afghanistan. The cover story of running cargo business in Iran’s Bandar-Abbas and Chabahar ports makes perfect sense if Islamabad’s version is to be believed. His task was to initiate a string of subversive activities on the Makran coast where not only Chinese are working on Gwadar port but Pakistan Navy and Air Force also have multiple facilities.

In a first, India’s ministry of external affairs confirmed that the person identified was a naval officer who opted to retire prematurely. The standard alibi in such cases is not to own a compromised asset. Delhi played the card to gain counsellor access which may not be granted any sooner. More bizarre is the swift manner in which the ministry of defense confirmed the identity details to the South Block. Those who know bureaucratic red-tapism in Indian bureaucracy will agree that the two ministries, often at odds, showed rare teamwork. May be the Modi government was long waiting to clarify about the missing spy.

Indian critics believe that it was a strategic mistake to own up a former military officer who had spilled the beans during the enemy custody.

Indian commentators suspect a high-level Pakistani mole in the Modi government who allegedly helped Islamabad ‘concoct the story against an Indian businessman’. The analysts, mostly retired military men and former ambassadors, are asking for review of internal security within the bureaucratic and political ranks in Delhi.

The Indian media perplexed with the question as to why would a spy carry a passport. The reality on the ground is that the man’s passport revealed by Pakistani authorities bears his ‘Muslim name’ and photo. The same is true for the Iranian visa. Seemingly, RAW acted with over confidence that it’s easy to operate in Pakistan’s south-western outposts, and did not resort to necessary precaution.

Balochistan has been long known to exist in a security vacuum where smuggled Iranian goods including petroleum product could be bought from local markets. However, the situation started to slowly change just before the Sui operation and killing or Akbar Bugti.

The Indian opposition to Chinese presence in coastal development project and CPEC is public knowledge. Development of Gwadar marginalises scope of Chabahar port for Iran and India both which is being developed to alternately link Tehran and Delhi to Afghanistan and Central Asia.

Its consulate in Zahedan, near the Pakistan border, has been long accused of subversive activities in Balochistan. Indian consulates in Afghanistan too have been under close Pakistani watch. As back as in 2005, India was alleged to air anti-Pakistan and pro-Baloch resistance radio transmission from Afghanistan.

Prime facie, the documents available and circumstantial evidence support Pakistan’s stance. The controversy is going to get more complex and last much longer.