Pakistan, Iran plan to take annual trade to $5b

Pakistan, Iran plan to take annual trade to $5b 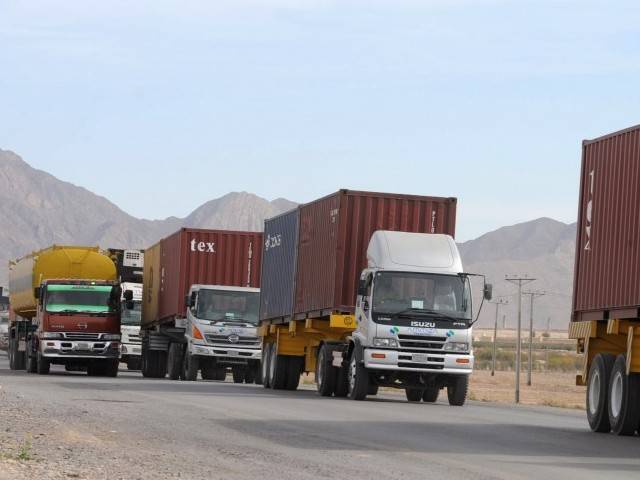 ISLAMABAD: Pakistan and Iran have planned to undertake scores of pragmatic steps under the five-year Strategic Trade Cooperation Plan in order to enhance annual trade to $5 billion.

The five-year plan will be signed by the Iranian minister for industry, mines and trade and Pakistan’s Commerce Minister Khurram Dastgir during the current visit of Iranian President Hasan Rouhani in the wake of lifting of international sanctions from Tehran.

The document of strategic cooperation states in view of decline in bilateral trade over the past several years, it needs to be raised to $5 billion annually in five years and to further higher levels subsequently.

A large number of challenges have been identified that should be addressed to achieve the trade objective.

The two countries will establish a mechanism to cope with issues hampering bilateral trade such as non-tariff barriers, absence of a mutual recognition agreement, lack of banking facilities, infrastructure bottlenecks and trade through informal channels.

In addition to strengthening the existing institutional arrangements, a separate mechanism on expert and technical levels will be put in place to deal with such issues and oversee implementation of the plan.

The two sides underline that for giving a fresh boost to bilateral trade and opening up commerce and investment, they need to offer market access under formal agreements.

In this regard, in addition to the preferential trade agreement (PTA), which has been in force since September 2006 and is being reviewed for better performance in line with the changed scenario after the lifting of sanctions, the two countries will enter into negotiations for a free trade agreement including trade in goods, services and investments.

They agree to move forward at a fast pace to conclude FTA negotiations, effectively implement the PTA, establish appropriate mechanisms for coordination in upcoming rounds of FTA talks and periodically monitor the progress.

Prior to first meeting of the joint working group that has already been established, Pakistan will share a draft framework of the FTA with Iran by the end of April this year and Tehran will give its response by the end of May.

The framework agreement will deal with trade in goods, trade facilitation, rules of origin and dispute settlement. Negotiations will conclude in one and a half years from June 2016 to December 2017 unless the two sides agree on an extension.

They will also try to open two more crossing points on the border, preferably by the end of 2016, potentially at Gabd and Mand on the Pakistan side and Reemdan and Pishin on the Iranian side.

The Trade Development Authority of Pakistan and the Iranian Trade Promotion Organisation will jointly draw up a comprehensive programme of promotional activities including single-country exhibitions, sharing of commercial intelligence and exchange of business delegations.

Under the five-year plan, the Pak-Iran Joint Business Council will be re-activated and a joint chamber of commerce and industry will be established. They will consider exempting bona fide businesspersons from seeking visa for commercial visits.