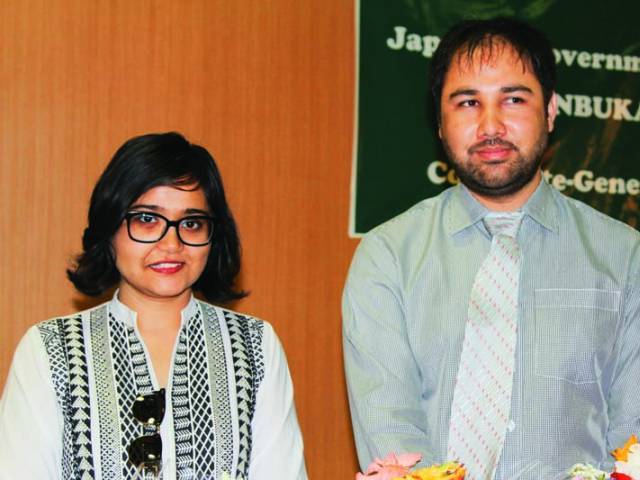 Amena Rehman from Karachi and Asad Ali from Quetta have been given scholarships to study in Japan by the Japanese government. PHOTO: AYSHA SALEEM/EXPRESS

KARACHI: Two Pakistani students are being given scholarships to study in Japan by the Japanese government.

An orientation was held on Sunday for Ministry of Education, Culture, Sports, Science and Technology (MEXT) Japan scholarship students Amena Rehman from Karachi and Asad Ali from Quetta at the Japanese Consulate in Karachi.

“I would like to extend my sincere congratulations to Amena Rehman from Karachi and Asad Ali from Quetta for being successfully selected as research students for the scholarship programme this year,” said Japanese consul-general Akira Ouchi. He expressed his hope that both of the students would not only further their studies but would also make friends with Japanese youths, in order to deepen their understanding of Japan. Ouchi said he hoped the two would utilise their new found knowledge and expertise for the development of Pakistan and also become bridges of friendship between Japan and Pakistan.

About 10 Pakistani students are recruited to go to Japan to study under the research student scholarship programme every year and this year eight Pakistanis have been selected so far, according to him. “The research students usually pursue Master’s degrees, while some pursue their PhDs,” he added.

Speaking to The Express Tribune, Ouchi said that he wished more Pakistani students would apply for the scholarships and go to Japan to study in order to deepen their understanding of Japan and make friends with Japanese people who will further promote mutual understanding and friendship between the two countries.

Rehman, who did her Bachelor’s of architecture from Indus Valley School of Art and Architecture, told The Express Tribune, said she is glad that she has been given a chance to further her studies in Japan. She has been working at the Aga Khan University as an architect and plans on doing a research programme in urban design and engineering from the Tokyo Institute of Technology. “This is a dream come true, as it has been my dream since I was a teenager to study in Japan,” she said.

Ali, on the other hand, is a teacher at the Balochistan University of Information Technology, Engineering and Management Sciences and has done his Bachelor’s in IT from the National University of Sciences and Technology. He said he was delighted that he had been selected to study in a country like Japan. He explained that he plans to pursue a master’s degree in IT from Tohoku University. Both the students vowed to come back to Pakistan and serve the nation with the knowledge they will gain from studying abroad.