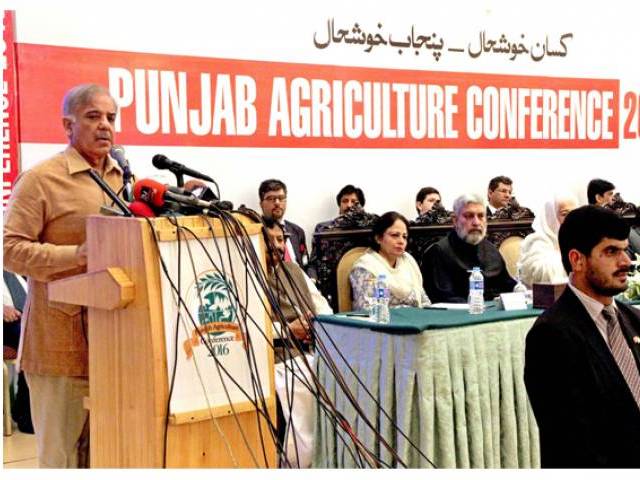 Addressing the Punjab Agriculture Conference 2016, the CM said that a kissan commission would be set up to resolve the problems of growers, increasing per acre yield and developing agriculture.

He said that Punjab Agriculture Conference 2016 had been convened for the development of agriculture. “Representatives of farmers, agriculture experts and government will deliberate in working groups and formulate concrete proposals and recommendations. A solid agriculture policy will then be formulated,” he said.

The CM said that Pakistan had taken lead over India in the production of cotton “Pakistan’s basmati rice has an extensive market overseas. Pakistan is the fourth largest milk producer in the world,” he said.

Shahbaz Sharif said that in 1998, his government had eliminated spurious agriculture medicines. “However, this heinous trade has resurfaced. Our farmers toil day and night, but there is no increase in per acre yield. Agriculture extension services have grown sluggish. Research institutions are not doing what they should. The practice of giving timely advice to farmers has also degenerated,” he said.

The chief minister said that agriculture and research development were integral. “Appropriate attention has not been paid to agriculture research in universities and agriculture research institutions. An increase in per acre yield is not possible without adopting modern technology. The government, agriculture research institutions and universities will have to work together to deal with these challenges,” he said. The CM said that Rs100 billion he had announced would be only for the development of agriculture. “In addition to the funds, work is continuing on the construction and rehabilitation of rural roads under a Rs150 billion project. Work is also continuing on the project for providing potable water in rural areas,” he said.

He said that the projects for generating thousands of megawatts of electricity would be completed by 2017-18. “Cheaper electricity will then be available in abundance,” he said.

Agriculture Minister Dr Farrukh Javed said that new policies would have to be formulated for the farmers to deal with the changing weather patterns.