Participants call for end to women’s harassment at workplace

Participants call for end to women’s harassment at workplace 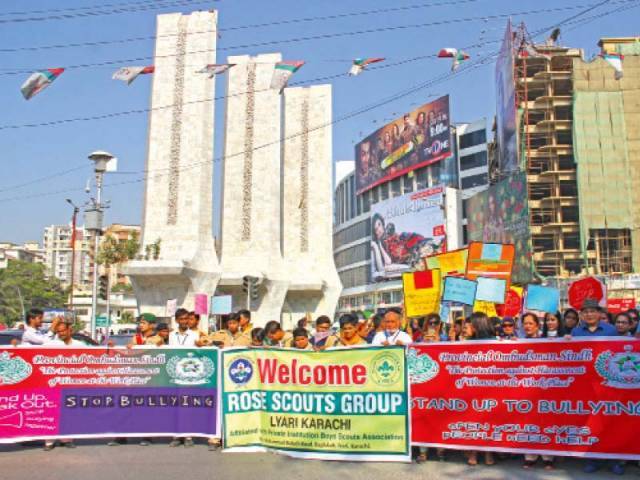 The walk started from Diamond Super Store near the Racecourse traffic signal and concluded at the ombudsman’s camp office in Bath Island after passing through Teen Talwar. PHOTO: AYESHA MIR/EXPRESS

It is high time that we make our workplaces and streets safer for women, as sexual harassment is a crime now, said Pir Ali Shah, the provincial ombudsman for protection against harassment of women at the workplace during a rally on Friday.

A walk was held by the ombudsman’s office to commemorate the International STAND UP to Bullying Day — a bi-annual event observed on the third Friday of November and the last Friday of February.

The walk started from Diamond Super Store near the Racecourse traffic signal and concluded at the ombudsman’s camp office in Bath Island after passing through Teen Talwar.

“The walk is a way to create awareness among people about harassment and bullying of women at the workplace,” said Shah, a former district and sessions judge. Talking to The Express Tribune, he said if anyone is harassed at the workplace, they should be aware that the provincial ombudsman is here for them.

Executive director of The Pakistan Institute of Labour Education and Research, Karamat Ali, said “Gender equality is an important aspect for the evolution of human society. In Pakistan, women are deprived of basic rights but the law [against workplace harassment] is a step forward for attaining equal rights for women in Pakistan, he said further.

“We should encourage a safe and relaxed workplace environment which encourages equality and discourages physical or psychological harassment towards women,” he told The Express Tribune. The 2010 Act for the protection of women against harassment at the workplace is a very progressive law and people should be reminded of it every now and then, he suggested.

Former Flight Lieutenant Musarrat Shah, an adviser at the ombudsman’s office, said “It’s the responsibility of people to condemn acts of harassment and bullying, especially of women at the workplace.”

Director human resource at the ombudsman’s office, Abdullah Shah, said the walk was organised to urge people to speak out about harassment and bullying. He said nobody wanted to talk about the issue but people have now started realising that it is a crime.