Band set to releas­e debut album ‘Elhaam’ which has been produc­ed by Mekaal Hasan
By Our Correspondent
Published: February 17, 2016
Tweet Email 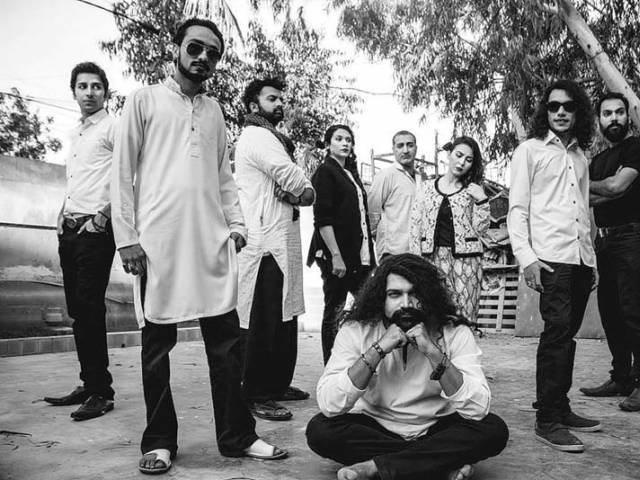 Sounds of Kolachi will soon be hitting the roads for a tour of Karachi, Lahore and Islamabad, along with Mekaal Hasan Band. PHOTO: FILE

Admittedly, it is normal for most musicians to feel apprehensive about releasing complete music albums. Not only does the venture require a great deal of time, effort and money, it is also dependent upon the reactions of the audience and runs the risk of grave failure, should they not like it. Considering this, it is no wonder Pakistani musicians generally prefer putting out one-off singles here and there, just to be on the safe side.

Ahsan Bari, however, marches to the beat of a different drum. As the frontman of Sounds of Kolachi, he believes there is only one way forward for artistes to leave a mark: an album. “The best way to judge a musician’s progression is through his albums,” said the vocalist, whilst speaking to The Express Tribune.

Taking centre stage in the US

Perhaps that is why Bari and his band have decided to release their debut album, Elhaam. According to him, the reason why music heavyweights like Peter Gabriel, Michael Jackson, Sting and Dream Theatre were able to ensure longevity was be releasing albums regularly. “Not only would it provide an artiste valuable self-assessment later on in his career, it will also go a long way in helping him earn recognition for his work,” explained Bari. Elhaam — which literally translates into intuition — is a concept album which touches upon a diverse range of subjects, from sufism to metaphysics and quantum physics.

In the months following its inception, Sounds of Kolachi has acquired popularity within the local music circuit for belting out covers of classic tracks like Ae Ri Sakhi. Although many would expect the trend to continue with the album, bassist Sameer Ahmed hinted otherwise, revealing that all eight tracks are original compositions. “There are no covers on the record for we feel that the top priority for any group should be to showcase their own work,” claimed Ahmed, former bassist for fellow rock band, Karavan. Bari went on to reveal how the entire album has a thematic connection. One track, which Bari believes encompasses all three of the afore-mentioned subjects — is Yaar Mileya. “In this song, we initially speak of how the soul desires to meet a higher consciousness — the basic premise of Sufism — and then correlate it to quantum physics and how particles are connected to one another.”

Produced under the watchful, expert eye of Mekaal Hasan, with Fahad Bukhari and Bari serving as co-producers, Elhaam is close to completion. In fact, the album entered the mix and mastering stage just recently. “Barring one or two featuring artistes who need to be recorded, the album is now in the final stages of production,” shared Bari.

According to Bari, Mekaal’s perfectionism and attention to detail has helped Sounds of Kolachi retain a live feel throughout the album.  “We haven’t used any tuners in the recording process, unlike most songs that are heard nowadays.”

Mekaal may be known for his mercurial nature but both Bari and Ahmed recalled their experience working with him as “enriching,” and hoped it will make way for more collaborative endeavors in the future. “Both the Mekaal Hasan Band and Sounds of Kolachi are different style of groups which made the collaboration between us easier,” recalls Sameer.

Aside from Elhaam, the band has got plenty of projects in the pipeline. It will soon be hitting the roads for a tour of Karachi, Lahore and Islamabad, along with Mekaal Hasan Band. The first performance of the tour will mark the first time, in over seven to eight years, that Mekaal and his band will perform in Karachi. “It’s a real tragedy that someone who is constantly performing in India and collaborating with artistes worldwide has been unable to perform in their own country,” lamented Bari. The concerts will see the two groups perform each other’s tracks apart from their own, as well as other classics.

In between the lines