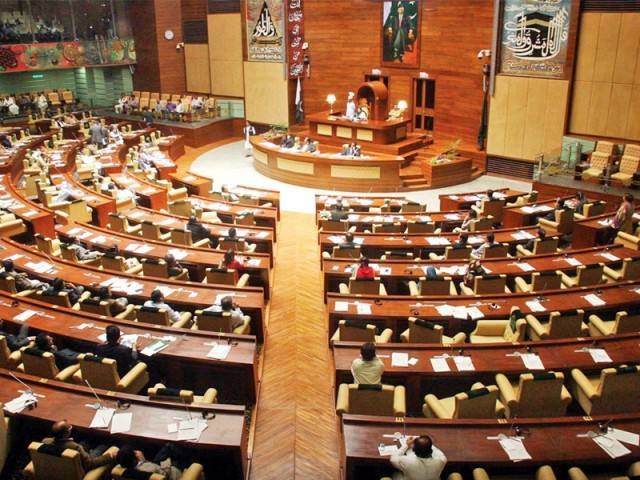 In an unprecedented move in the Sindh Assembly, the ‘minority’ ruled over the ‘majority’ when the opposition’s resolution criticising the government’s role in resolving the city’s water crisis was bulldozed by the treasury benches.

During the session presided over by speaker Agha Siraj Durrani on Tuesday, opposition members, who had a majority, moved a resolution over the government’s delay in solving Karachi’s water crisis. Despite having fewer members on the treasury benches, the government amended the resolution in its favour and got it passed from the assembly.

The session turned noisy when the speaker gave the floor to Pakistan Tehreek-e-Insaf (PTI) MPA Khurrum Sher Zaman to move his private resolution, which reads “The assembly resolves that the government of Sindh take immediate notice of the long standing delay in the ongoing water supply schemes for Karachi of 165 million gallons per day (MGD).”

Reading his resolution, Zaman questioned why there was a delay by the government to initiate the water supply scheme. “Government should release the funds for repair and maintenance of pumps,” he said.

While the opposition members, including opposition leader from the Muttahida Qaumi Movement (MQM) Khawaja Izharul Hasan, criticised the government over its failure to redress the issue, the treasury members lauded the government.

The local government minister defended the government, saying, “We have acquired 11,000 acres for the Rs25.5 billion funded K-IV project that will be completed within two years. Through this scheme, we will be able to provide 650 MGD water to Karachi.”

Senior minister Nisar Ahmed Khuhro suggested the opposition members to amend the resolution, saying, “Government is putting lots of efforts in executing different water schemes for Karachi. Your resolution will only be passed when you amend it.”

Crackdown against criminals: ‘Sindh Assembly is not against Rangers operation in Karachi’

Khuhro suggested Zaman to erase the sentence “long standing delay on the part of government”. The PTI MPA agreed and started reading his resolution when finance minister Murad Ali Shah stood up and said, “You must recognise the government’s efforts by adding a sentence in your resolution, otherwise we will oppose it.” This irked the opposition MPAs who started to protest. “It is private members day and every member has a right to move his or her resolution,” said the opposition leader.

Referring to assembly rules, Shah said, “There is no restriction. Any other member can also move an amendment to the resolution,” and started reading the proposed amendment.

During the debate, opposition members repeatedly diverted the speaker’s attention towards the “thin” attendance on the treasury benches, saying the government cannot pass any resolution or bill as the opposition has a majority.

The opposition MPAs then stood up from their seats and chanted slogans against the government’s ‘corruption’. The speaker put both the resolutions in the house for approval and despite louder “ayes” for the opposition’s resolution, the speaker decided in favour of the government. He said, “Your louder voice will not make sense. The government has a majority.” Amid the protest, he adjourned the proceedings till Friday.

At the time of voting, there were 33 MPAs on the treasury benches compared to 35 opposition members.

Earlier, the opposition leader alleged that former local government minister Sharjeel Inam Memon had gotten billions from illegal water hydrants operating in Karachi. “I informed Memon about it but he did not take notice of it. Now, he himself has become an absconder,” he said.

The finance minister asked the opposition leader to avoid using the word absconder for Memon. “His name has only been put on the exit control list, which is nothing but political victimisation,” he said, and asked the speaker to expunge the word.

On the other hand, in a statement issued from London, Memon said he had taken action against illegal encroachment by MQM workers in the city that was why the opposition leader issued such a statement against him.

When the session started, the finance minister informed the house that the Sindh government would oppose the federal government’s plan to set up LNG power plants.  “The federal government has convened a meeting of ECNEC on Wednesday (today) in Islamabad where they would talk about the issue,” he said, adding that Sindh would oppose the decision as the matter has not yet been approved by the Council of Common Interests.