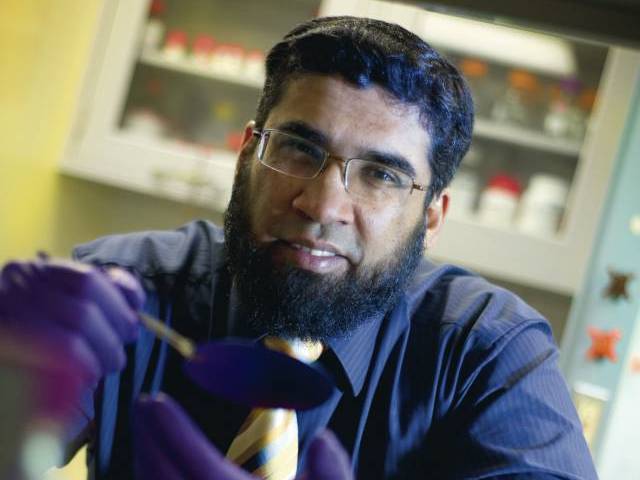 PHOTO: University of Texas at Arlington

Pakistani electrical engineer at the University of Texas at Arlington has developed a new cancer cell detection method that will be able to  improve early diagnosis of cancer.

Samir Iqbal, an associate professor in the Electrical Engineering Department, detailed his team’s results in a recent Nature’s Scientific Reports paper called “Effects of Nanotexture on Electrical Profiling of Single Tumor Cell and Detection of Cancer from Blood in Microfluidic Channels.”

Iqbal said his team observed the many layers of tissue in the human body and decided to develop something that would mimic that layering.

“The answer was in creating a nanotextured wall that fools blood samples into thinking its actual tissue,” Iqbal said. “We used inherent properties of the cell walls to create a diagnostic tool. The cancer cells behave differently as they come into contact with the nanotextured walls. They dance,” he added.

“Discovering the cancer earlier, before it metastasizes, is essential to surviving cancer,” Iqbal said. “Our device has the potential to do that.”

The published results stem from a 2014 $480,000 National Science Foundation funding that sponsored the design and creation of the device. Iqbal has received nearly $1.4 million in grants since his arrival at UTA in 2007.

Those grants included an NSF CAREER grant to create a nanoelectronic microfluidic biochip to detect biomarkers. He also directs the UTA Nano-Bio Lab and is an affiliated faculty for the UTA Bioengineering Department.

In 2013, Tau Beta Pi inducted him as an Eminent Engineer. Khosrow Behbehani, dean of the UTA College of Engineering, said Iqbal’s research is groundbreaking. “Dr. Iqbal and his colleagues are bringing engineering innovation to meet the challenge of early cancer detection,” Behbehani said.

“The research aligns with UTA’s Strategic Plan, particularly the focus on Health and the Human Condition. Dr. Iqbal’s device could greatly improve cancer survival rates, which is good news for humanity. There are very few people around the world whose lives have not been touched by this dreadful disease.”

Iqbal did his bachelors from NED University of Engineering and Technology in Karachi in 1996 after which he did his PhD from Purdue University in Indiana.