This may be the world's most terrifying airplane runway

This may be the world's most terrifying airplane runway 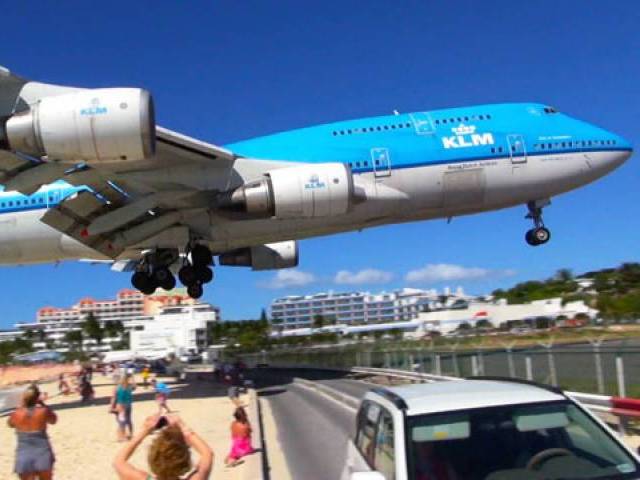 Would you line-up to watch an airplane land and take-off? Well here’s one place where you just might.

At the Princess Juliana International Airport in the Carribean Island of St Maarten, holidaymakers flock to the beach surrounding the airport to watch as passenger jets take-off just above their heads. In fact it is even considered a tourist attraction, according to Travel and Leisure.

Here’s why airplane windows are round instead of squares

With only 7,152 feet of runway before hitting the Caribbean waters, the runway is considered one of the scariest in the world. Having said that, catching a Boeing 747 or Airbus 340 barely skimming the airport fence and landing in the area is quite a sight especially for the beach-goers who catch a glimpse of the belly of the plane as it passes by.

Despite warnings that blasts from low-flying jets can cause serious injuries or even death, tourists crowd the the beach to take photos with the air-planes.

Earlier this month, a tourist  captured the moment a passenger jet flew just above the heads of holidaymakers on the crowded beach. The intense footage shared on YouTube shows the PAWA Dominicana plane flying above blue waters. The video then pans out, showing astonished onlookers on the beach.

Princess Juliana airport is the second-busiest airport in the eastern Caribbean region.