Act has been termed as a misuse of the in-flight announ­cement system­
By Entertainment Desk
Published: February 5, 2016
Tweet Email 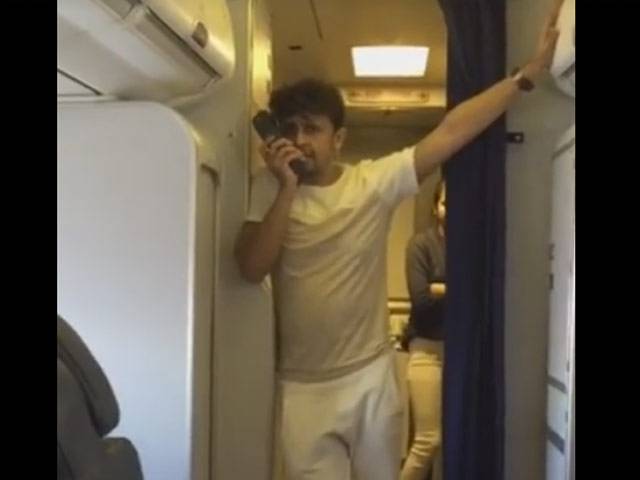 Act has been termed as a misuse of the in-flight announcement system. PHOTO: MISSMALINI/FACEBOOK

Sonu Nigam’s concert on Jet Airways may have bowled passengers over and left others jealous but Indian aviation regulator was far from impressed and took strict action against it.

Following the incident, Directorate General of Civil Aviation asked the airline to suspend the five air hostesses on board for allowing the singer to use the in-flight intercom, Times of India reported.

Subsequently, the airline has been warned and directed to ensure this does not happen again in the future.

A statement issued by Jet confirmed the action. “All cabin crew on the flight have been taken off flight duty for enquiry and corrective training to reinforce strict adherence to operating procedures,” read the statement.

“To suspend crew members for asking me to sing on the address system, when the seat belt signs were off, and no announcements were to be made, is nothing less than punishing someone for spreading happiness,” he wrote.

Sonu Nigam on plane n jet airways staff suspended. No place for innovation in cooperate world but It must be treat for passengers.

Crew punished because Sonu Nigam sang in the plane.

Imagine what would have happened if Himesh Reshammiya was on board…

Crew punished because Sonu Nigam sang in the plane. They should thank god it wasn't Himesh, pilots would've crashed the flight voluntarily.

So yeah. Jet Airways suspends crew that allowed Sonu Nigam to sing on a plane. Woohoo! Life is not a fucking movie. Learn.

The in-flight concert took place during a chartered flight from Jodhpur to Mumbai on January 4. Where passengers on board had requested Sonu Nigam to sing.