P* loved weddin­gs and went missin­g from one too
By Rabia Ali
Published: February 5, 2016
Tweet Email 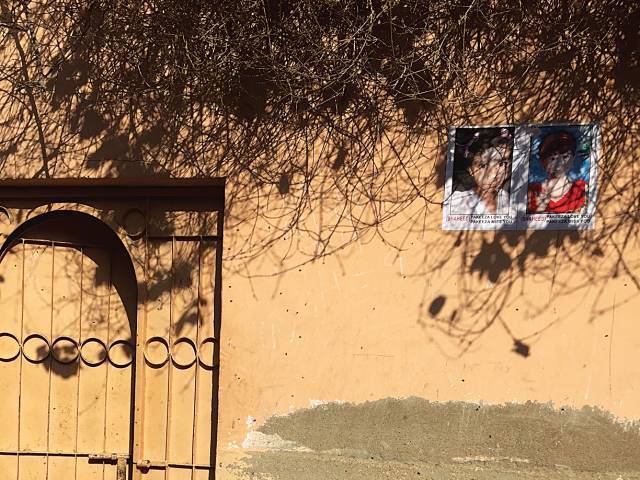 The victim’s family put up posters around the neighbourhood as part of recovery efforts. PHOTO: EXPRESS

A medical report confirmed on Thursday that the five-year-old found dead inside a water tank in Orangi Town earlier this week, was sexually assaulted before she was killed.

P* was subjected to the act of “vaginal sexual intercourse” and died due to drowning and cardiorespiratory failure, confirmed the report by medico-legal officer of Abbasi Shaheed Hospital, Yasmin Qamar.

The authorities have collected DNA samples to trace the culprits but the family felt the police are overlooking this aspect in their investigations. “This report is proof that my daughter was killed and did not slip in the tank,” said her father, Faizur Rehman. “Her body was thrown in [later] as I did not find her when I looked in the tank on that day.”

Meanwhile, Orangi Town SP Ali Asif said they have arrested 21 men, all employees of the wedding lawn where her body was found, and are looking into the case. It appears to be a murder but we are awaiting the MLO’s final report, he said, adding the report that confirms sexual assault is an ‘initial’ one. He did, however, agree with the father that P had not slipped. “If the girl had slipped, she would have shouted and no one heard any screams,” said SP Asif.

The girl who dreamed

Dejected by the slow pace of investigations, the family still hopes for justice. “Our daughter can’t come back but this shouldn’t happen to anyone else’s daughter,” said Rehman.

P loved going to weddings. She would pose for her parents before going to weddings and at the ceremony, would walk up to the stage to catch a glimpse of the bride and groom. At home, she would wear a red lehenga and put on lipstick, pretending to be a bride.

On Monday, January 25, the five-year-old dressed up in an orange shimmery dress and a silver matha pathi (head ornament) as she made her way to what would be the last wedding of her life.

P went missing from the wedding lawn the same night. Nearly a week later, her bloated body was found floating in the lawn’s water tank. She was wearing the same dress but had only one shoe on. The medical report confirmed she was criminally assaulted and her family believes it was one of the men working at the premises.

“She loved going to weddings. I wish I had not taken her to that one,” cried her mother, Reena, as she flipped through her photographs. P’s father sat next to Reena, staring at the photo of a chubby baby with a dark spot on her cheek. The next photo is of a slightly grown up girl sporting a new school uniform.

“She loved watching cartoons, and was a fan of Imran Khan,” her mother recalls. “She would rush to the television every time he came on.” P, who was going to turn six in April, never missed school and would eagerly wake up every morning.

The composed yet heartbroken parents sat in the small room where P would often sleep with her grandmother. Her father recalled what happened on the day she went missing.

On January 25, the family went to attend a wedding of their neighbours at Shehnai wedding lawn in Orangi Town. She sat with her younger sister at a table, playing games. The two roamed around the venue, making friends with other children attending the wedding. Once dinner started, Rehman recalled he saw her eating kheer (dessert).

At midnight, Rehman decided to call it a night. He asked his wife to get the kids as they had school the next day. They looked around but could not find her. The entire lawn echoed with shouts of her name, other guests also joining their search. Parents of the victim. PHOTO: EXPRESS

“We even checked the degh [cauldron],” said P’s grandmother. “Imagine who checks deghs to look for their children?”

Rehman went after the management to look inside the water tank but she was not there. An hour later, he went to the police station to register an FIR but the duty officer only made a note in their daily records.

Tired and worried, the family returned home at 3am, only to leave home after the morning prayers to look around. They went to all the government hospitals and peeked at bodies at morgues. They kept on going back to the wedding lawn. Text messages were circulated, posts were posted on Facebook and pamphlets were pinned on walls around the area.

It was three days later that the police finally registered a case. On Sunday (January 31), the family received the dreadful news. P’s body was found from the same water tank in which her father had looked the night she went missing.

The parents relived their worst nightmare but are determined to bring down the culprits. Rehman wants the Rangers chief and federal interior minister, Chaudhry Nisar, to take action. He wants the trial at the anti-terrorism courts and prays no other parent experiences such trauma.

Inside the family home, P’s younger sister still asks for her sister. Outside their home on a narrow, broken street of Orangi Sector 11.5, P’s pictures are taped on the walls. One of the posters asks people to share the whereabouts of the missing girl, the new one carries her photo with these words: “Shaheed P, P we miss you.”

*Name hidden to protect identity after confirmation of sexual assault