So it begins: Superstars start arriving in UAE for PSL

So it begins: Superstars start arriving in UAE for PSL 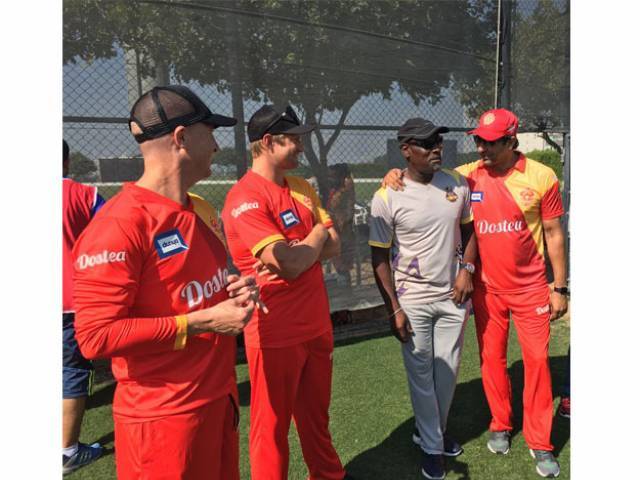 Richards is serving as the ambassador for Quetta Gladiators and will be mentoring and motivating their players. PHOTO: Nabeel Hashmi/Express

Richards, who is the ambassador for the Quetta Gladiators and will be mentoring the players from the Quetta outfit, had special praise for Pakistan cricket.

“I’m absolutely excited to be joining the PSL as Gladiators’ ambassador because I have a special affection for Pakistan cricket and its cricketers. Even when West Indies were at their peak, the one team we feared was Pakistan and no other,” Richards told The Express Tribune. “This country has got the best talent in the world and it’s all about motivating the players and that is what I’m here to do.”

“Today I became a fan again because I met my childhood hero Richards,” Sethi told The Express Tribune. “I literally had to pinch myself to make sure I wasn’t dreaming. This just shows how grand the PSL is going to be as it has attracted amazing cricketers from across the world.”

Australia all-rounder Watson, meanwhile, also expressed his excitement at the chance of playing with familiar faces such as Misbahul Haq, Saeed Ajmal, Mohammad Sami and Wahab Riaz, and meeting his boyhood heroes — compatriot Dean Jones and Sultan of Swing Wasim.

“I grew up watching Dean [Jones] so it is really exciting for me to be working with him now while another name that excites me is Wasim, who had one of the most amazing skills as a fast-bowler,” said Watson. “I’m looking forward to doing well in the event and hopefully the PSL would be a success.”

Bangladesh players have not been able to join their respective PSL teams as they are facing difficulties in getting their visas.

“We’re facing some difficulties in getting the Bangladesh players to the UAE because of visa issues. Hopefully, their visas should arrive soon and they will be able to join their teammates,” said Sethi.

Medium pacer Mutafizur Rahman and Jade Dernbach are already ruled out of the PSL, while Thisara Perera has pulled out due to international commitment as Sri Lanka would be playing against India in February.