Scores of people were also wounde­d in the bombin­g at the entran­ce of the base
By AFP / News Desk
Published: February 1, 2016
Tweet Email 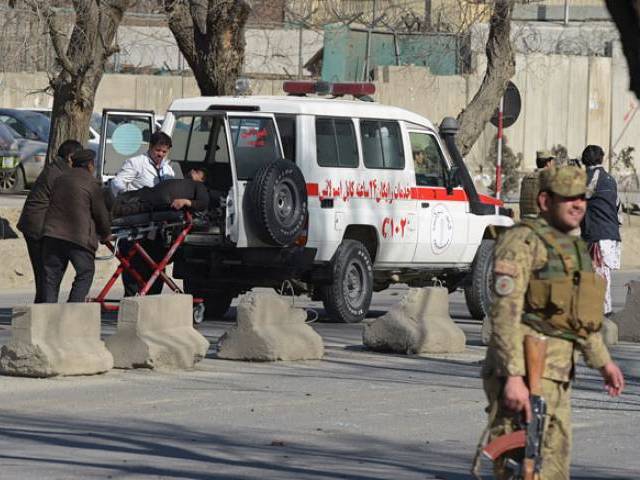 Afghan security personnel carry a victim to an ambulance at the site of a suicide car bomb next to a police base in Kabul on February 1, 2016. PHOTO: AFP

KABUL: Taliban suicide bomber struck a police base in central Kabul Monday, killing at least 20 people just days before a fresh round of international talks aimed at reviving dialogue with the group.

Twenty-nine others were also wounded in the bombing at the entrance of the base, which left several bodies and charred debris strewn around the area.

The attack comes amid the Taliban’s unprecedented winter offensive despite a renewed push to restart formal peace talks.

The interior ministry initially reported the attack as a suicide car bomb, but later said the attacker appeared to be on foot and detonated himself in a queue of people waiting to get inside the base.

“Ten people were reported killed and 20 others were wounded in a suicide attack in Deh Mazang square of Kabul city,” deputy interior minister Mohammad Ayoub Salangi said on Twitter.

“Most of the victims were civilians.”

Kabul police spokesperson Basir Mujahid reported a death toll of nine, adding that as many as 12 people including a woman were wounded.

The health ministry said some of those wounded were hit in the chest by flying shrapnel and are in critical condition.

Ambulances rushed to the scene, which was cordoned off by authorities.

The Taliban claimed responsibility for the attack, with insurgent spokesman Zabihullah Mujahid claiming on Twitter that up to 40 police were killed and wounded.

The militants routinely exaggerate the toll in attacks on the Afghan government.

The carnage comes just ahead of a third round of four-country “roadmap talks” trying to lay the groundwork for direct dialogue between Kabul and the Islamist group.

Delegates from Afghanistan, Pakistan, China and the United States are set to convene in Islamabad on February 6 in a bid to seek a negotiated end to the Taliban insurgency, now in its fifteenth year.

The Taliban have stepped up attacks on government and foreign targets in Afghanistan this winter, when fighting usually abates, underscoring a worsening security situation.

Kabul in blackout as government struggles to fix power lines

In recent months the Taliban briefly captured the northern city of Kunduz, the first urban centre to fall to the insurgents, and have seized territory in the opium-growing southern province of Helmand.

Observers say the intensifying insurgency highlights a push by the militants to seize more territory in an attempt to wrangle greater concessions during talks.

Pakistan hosted a milestone first round of talks directly with the Taliban in July.

But the negotiations stalled when the insurgents belatedly confirmed the death of longtime leader Mullah Omar, sparking infighting within the group.

The first and second round of the four-country talks were held last month in Islamabad and Kabul respectively.

Pakistan strongly condemned the terrorist attack at a police compound in Kabul on Monday, resulting in the loss of innocent lives and injuries to several others.

In a statement, the foreign office expressed condolences with Afghan government and the bereaved families.

“We reiterate our condemnation of terrorism in all its forms and manifestations,” the statement added.

Kabul in blackout as government struggles to fix power lines