Aquari­um in South Korea says its bigges­t shark has eaten anothe­r in what it has descri­bed as a 'turf war'
By Reuters
Published: January 30, 2016
Tweet Email 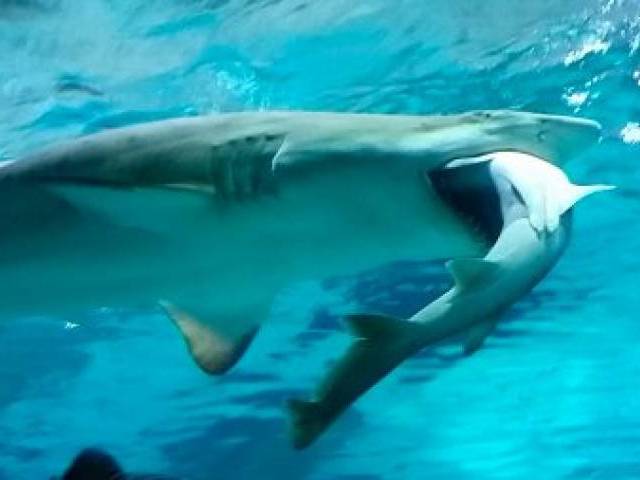 SEOUL: An aquarium in South Korea has said its biggest shark has eaten another in what it has described as a “turf war”.

In the first such incident at Seoul’s COEX aquarium, an eight-year old female sand tiger shark, some 2.2 meters (7.22 ft) long, is said to slowly eaten a smaller five-year old male shark, about 1.2. meters in length.

The attack is said to have happened early Thursday evening and about 10 minutes later, the female was filmed swimming with the body of her tank mate hanging out her mouth.

Some 21 hour later only the tip of the tail remained.

The aquarium said the tail is expected to stay in the shark’s mouth for about four to five days. Unable to digest the creature, it will then will regurgitate it after about a week, the aquarium added.

“Sharks have their own territory. However, sometimes when they bump against each other, they bite out of astonishment,” COEX aquarium PR manager Oh Tae-youp said.

“I think the shark swallowed the whole body, because they usually eat it all when they bite the head part.”

Iranian drone flew over US aircraft carrier operating in Gulf: US Navy