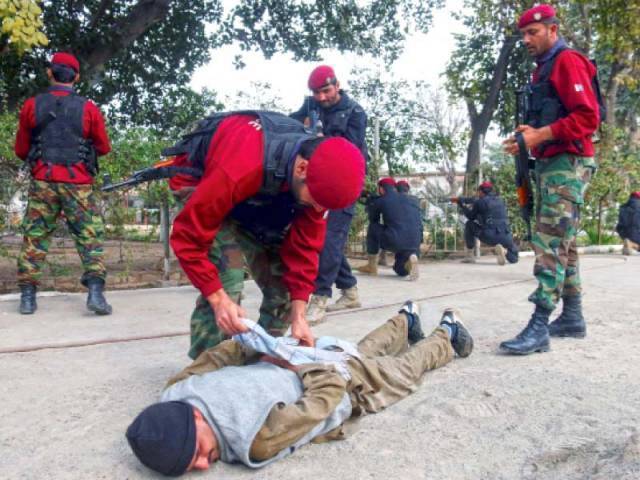 PESHAWAR: The Special Combat Unit (SCU) of police conducted two more security rehearsals at the Judicial Complex and Judicial Colony on Friday. The Rapid Response Force and SCU also conducted reconnaissance of Islamia College University where a full-fledged rehearsal was scheduled for Tuesday.

During the exercise, police commandos showcased their skills of evacuating people from a building under attack, cordoning off the area and fighting terrorists.

Talking to The Express Tribune, Cantt SP Kashif Zulfiqar said the main objective of the exercise was to sensitise people about the situation, test the capabilities of the police commandos and check the response time of the units.

“We meet teachers at schools and tell them what should be done immediately to survive in the event of an attack, how they can save the lives of students till police arrive and engage the terrorists,” he explained. The SP added reconnaissance is done before a rehearsal in which police carefully check entry and exit points as well as the entire building to launch an effective response.

He said the first exercise on Friday took place in Judicial Colony in Hayatabad and the second one was at the Judicial Complex in Cantonment. More are planned for the coming days.

“The Special Combat Unit arrived in Peshawar three days ago and conducted four exercises in the past two days. The Rapid Response Force has been [deployed around] the city so average response time has been reduced to just 7 or 8 minutes,” said Zulfiqar.

“We are trying to tell people not to panic in the event of an attack – that is the key to survival.” The SP added, “Secondly, guards and those with guns should try to resist till the police arrive. What we need is more coordination and awareness to deal with this situation,” he added.