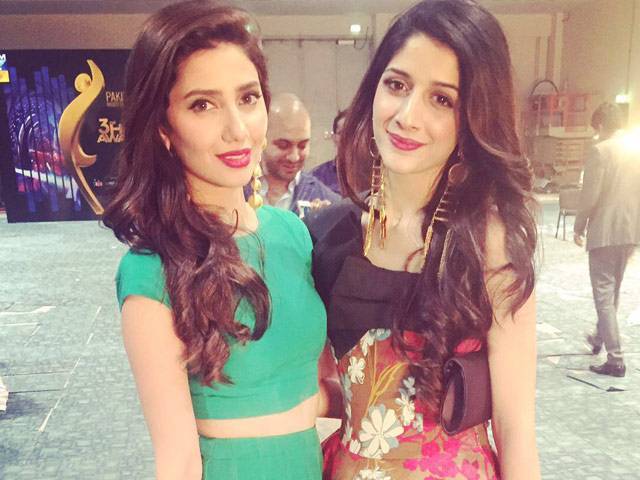 As the two leading ladies of Pakistan, Mahira Khan and Mawra Hocane, gear up to make their Bollywood debut this year, all eyes are set on their box-office battle!

While fans of each are banking on their favourites, Mawra Hocane, who will be seen in upcoming Bollywood film Sanam Teri Kasam, thinks there is no competition with Mahira Khan, who will star alongside B-Town megastar Shah Rukh Khan in Raees. She said that the Humsafar actor is someone she looks up to and is proud of.

“When Mahira’s show Humsafar released I was not even an actor. I look up to her. She is stunning and truly gorgeous in the real sense. There is no competition at all. She has been in the industry longer, it has been only two-and-half years for me,” Mawra told PTI, reports Indian Express. @TheMahiraKhan just saw your tweet. ‘Uff’ we will look good in Raees too. Hope all is well with you and family.

The 23-year-old actor also shared that Sanam Teri Kasam will release in India and Pakistan simultaneously in February and is already making waves in her hometown.

“People in Pakistan did not expect the film to be this big. They are thrilled and the word of mouth is very positive there. No one of my age [from Pakistan] has come to India and done a film. Nobody has been ‘launched’ in that sense. I am extremely grateful that I am a part of this film,” she said. Revealing further about how she bagged the role in the romantic-drama, Mawra said, “The makers had called me and narrated the story on Skype. The moment they said that it’s a story of a simple, bespectacled girl I knew I would be doing it. Because when you have a girl with spectacles, you will also have her transformation. I will get to show both sides,” she said adding, “I was on board instantly.”

She added that she is content with her experience and isn’t nervous about the release. “I am not nervous really. I am not over-confident either but very satisfied because what we wanted to create, we have achieved that. Everyone worked as a team and I am very pleased with the result,” she said.

The actor will be seen sharing screen space with Harshvardhan Rane in the upcoming film which will release February 5th.