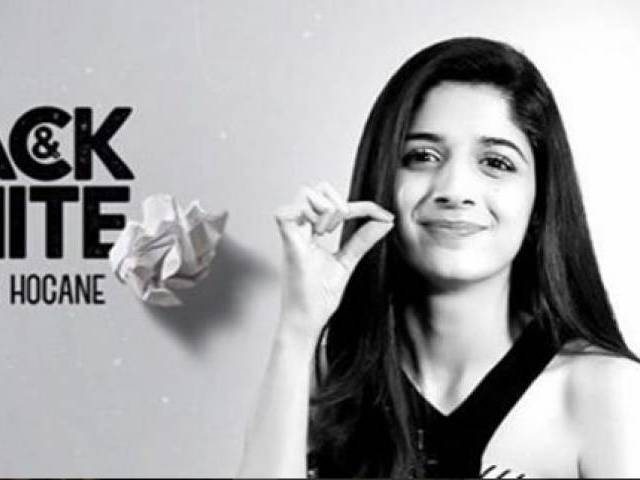 Pakistani starlet gets candid about her personal life during promotions of 'Sanam Teri Kasam'. PHOTO: INSTAGRAM

The Pakistani starlet who is all set to make her Bollywood debut with Sanam Teri Kasam gets candid about her personal life.

Amidst the promotional rounds of her upcoming film, Mawra Hocane shared her quirky life experiences in a rapid fire round.

In the three-and-a-half minute video titled: ‘Black & White with Mawra Hocane’, the actor, who will be sharing screen space with Indian actor Harshvardhan Rane, revealed everything from her wishlist to her idea of one-night stand.

Here are the 20 things you definitely didn’t know about Mawra before:

2) What’s always with her

“My phone, my bag and my perfume.”

“I am not very fond of cooking but I can cook well because of my mom. I think, I can cook some nice Pakistani biryani.”

“I am a cry baby. A lot of people don’t know this. I can cry on almost everything.”

5) Urwa Hocane is her favourite person

“I love my sister the most. She is the best part of my life.”

Trailer out: Will Mawra Hocane’s ‘Sanam Teri Kasam’ live up to its hype?

6) 3 smartest people for her

“Christiano Ronaldo is super hot. Then there is Ranbir Kapoor, I think he is very smart and Harsh, my smartest hero.”

“Harsh’s! I am closely understanding him these days. But if I want to read someone’s mind, it’s definitely Harsh’s.”

8) A “chocolate fudge cake” is her biggest indulgence

“I can eat a full chocolate fudge cake. Also, getting my nails done can make me happy.”

“I don’t think there is anything in the world that I cannot face.”

10) Winning awards is on her wishlist

“I want to win all the debutante awards this year and I am working hard for it.”

11) “Princess” is her favourite compliment

“The most overwhelming compliment is that Harsh keeps on calling me a princess. I think it’s the best.”

“I can binge-watch Bigg Boss. I think it’s super cool.”

“This song from Tamasha is on the loop in my playlist.”

“I can feel for anything. I am pretty much sentimental about everything.”

“When my mom told me that Mawra means outstanding, I was blown away. I think I was 8 or 9.”

17) Her first kiss ever is in Sanam Teri Kasam

“My first kiss is going to be the one you will see in this film.”

18) She took all her friends on her first date

“My first date was very cute when in school we believed that if we go with all our friends, it would be a decent date. So, my first date was me going with four of my friends and him coming with three friends.”

19) Pre-marital sex is not on her mind

“What should I say?” “Did Harsh answer this one?”

The video is available at the official site: Eros Now. Sanam Teri Kasam will hit theatres on February 5.

Farhan Akhtar and wife part ways after 16 years of marriage