Sun or security: Too cool for school?

Sun or security: Too cool for school? 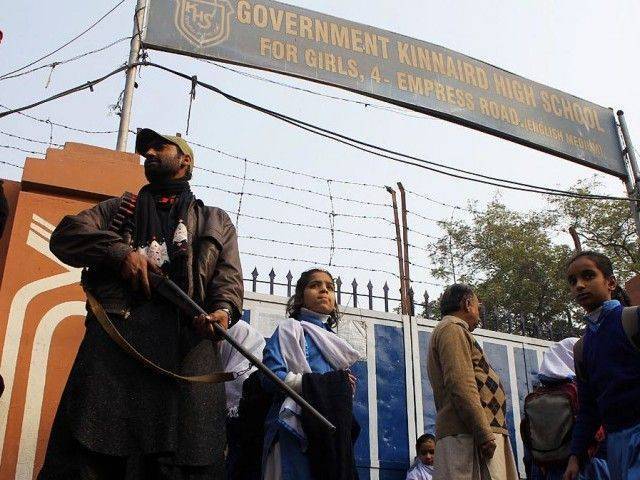 PESHAWAR / CHARSADDA / KARACHI / LAHORE: For many parents, sending their children to school in the morning is like sending them into battle. They pray that once school hours end, their children will return home; that they will not be dubbed ‘martyrs’. Martyrs who gave up their lives just for going to school.

The attack at Bacha Khan University, Charsadda on January 20 that claimed the lives of 22 people, mostly students, has instilled fresh fear in the minds of parents and educationists already reeling under the tragedy of the Army Public School massacre in 2014. In a video released a day after the Charsadda attack, the Taliban group led by Omar Mansoor vowed to launch similar attacks on schools and colleges across the country, spreading further panic. Intelligence reports, too, validated these threats. Yet, some officials insist the closure of schools is due to cold weather.

To add to the confusion, ISPR officials confirmed earlier that all Army Public Schools across the country will remain closed till January 29 and reopen on Monday. They did not, however, cite a reason, fuelling speculation about fresh threats. Similarly, schools run under the federal board will also reopen on February 1.

This leaves private and provincial public schools in a sticky situation. Pressure from parents and security concerns are forcing them to close down too. Parents, on the other hand, complain they are unsure whether schools are open and, if so, should they even send their children. As a result, attendance has been significantly low in educational institutes across Pakistan. Police commandos during a drill in Peshawar. PHOTO: INP

According to officials of the Khyber-Pakhtunkhwa education department, they received a threat advisory on January 26 from the counter-terrorism department saying Peshawar is expecting an attack in “upcoming days”. The advisory mentioned the high court and university campuses, but education officials said the threat was unspecific. On Thursday though, Government High School for Boys, Sheikhabad received a letter in which its principal was asked to shut down the school or it would be dealt with like APS and BKU.

However, Capital City Police Officer Mubarak Zeb has made it clear it is up to the schools’ administrations to secure their schools. In a meeting with heads of government and private schools, colleges and universities two days ago, Zeb said it is not possible for the police to provide security to each and every school in the city. K-P Elementary and Secondary Education Director Rafiq Khattak even went so far as to say there were no threats to educational institutes. Vexed at the government’s inaction, All Primary School Teachers Association’s (APTA) K-P President Malik Khalid Khan told The Express Tribune a teacher’s job was to teach, not to protect students from terrorists. He criticized the Peshawar district police for registering cases against heads of 200 schools over inadequate security measures, saying they did not have enough funds to install barbed wire, CCTV camera, hire guards and increase the length of boundary walls.

A parent standing at the gate of Allied Public School in Saddar said a van used to pick and drop his children. Now, however, he does it himself. “I’m so scared I coax my children to rush inside the school gates in the morning. I do the same in the afternoon when they come out and climb in the car. I only relax once they are home,” he says.

In Charsadda, paranoia is so high students say they cannot concentrate. Attendance has been low at all educational institutes since the BKU attack. A third-year student of Charsadda Institute of Technology (CIT) said his parents are not willing to send him to school as opposed to earlier when they forced him to go. Another third-year student, Iftikhar Ahmed said the journey to college has become nerve-wracking with even the slightest sounds rattling his composure. Half of the city’s schools were shut down two days before the weekend amid confusion and panic in wake of the closure announced by the Army Public Schools and College Systems (APSACS). On Tuesday evening, parents received a message from the APS in Karachi saying the school will remain closed for three days and reopen on February 1. “They just sent a message without giving a reason behind the three-day closure,” complained a student’s parent. A senior official of APSACS confirmed the closure, saying all APS schools across the country follow the same calendar.

A day later, other big school chains including Karachi Public School, Bahria Schools and Colleges along with most schools in the affluent DHA area remained shut. Campuses of Generation’s School, The City School, Beaconhouse, Nasra, Habib and missionary schools, however, remained open.

A spokesperson for the Beaconhouse School System said they have beefed up security and are not even allowing parents to enter the premises during school timings. The head of Habib Girls School also claimed they were relying on their own security setup.

A worried parent whose two children study at The City School said only half of the students had showed up on Thursday. He maintained the government should announce a uniform policy regarding closure of schools. The father of a student from St Paul’s school, which shares a boundary wall with APS, demanded parents be clearly informed of the reasons for the closure of schools.

Sindh Education Secretary Fazlullah Pechuho said it was decided in a meeting presided by the chief minister and DG Rangers that no school would be closed over security threats, adding there would be visible patrolling of law enforcement agencies (LEAs). Speaking outside the Sindh Assembly, Minister for Education Nisar Khuhro also said they were increasing vigilance, claiming Rangers had pointed out 56 sensitive spots. He also directed LEAs to not allow any roadside vendors outside schools. A mason is building a check post outside a school in Lahore. PHOTO: NNI

There is much confusion over the reason for the closure of schools in Punjab till January 31. DCO Lahore Captain (retd) Muhammad Usman said on Thursday the decision to close schools from Tuesday onwards was taken in light of adverse weather conditions. Low visibility due to heavy fog and extreme cold was taking a toll on attendance and parents were worried about their children falling ill, he said.

However, a letter sent to all EDOs education across the province directs them to ensure fool-proof security of all schools. The representative of a private school also said they had received instructions to enhance security by following the protocol set by the government.

The representative of a body comprising students’ parents in Lahore, Faisal Khalid Sheikh said it was highly unlikely that the sudden announcement of holidays was made due to weather conditions. “Most big private schools have made security arrangements, but smaller schools lack the resources,” he said, claiming schools and colleges in residential neighbourhoods were most vulnerable.

Last Saturday, at least three schools in Faisalabad had threatening messages painted on their walls. One message read, “If the school is opened on January 26, it will be blown up with a bomb.” Following this, parents demanded security guarantees, saying they would otherwise not send their children to school. As a result, confusion persisted with some schools shutting down and others remaining open. A parent, Muhammad Jamil said the government was hiding its incompetence by closing schools over security concerns and then blaming it on the weather.

Federal Interior Minister Chaudhry Nisar Ali Khan’s plea to keep schools open had little impact on the capital. Taking the cue from APS, some private schools including those headquartered in Lahore were closed since Tuesday. This created some confusion in government schools, forcing the Minister of State for Capital Administration Tariq Fazal Chaudhry to issue two press notices confirming public schools would remain open.

Before the APS and BKU attacks, there was the deadly suicide bombing at Sardar Bahadur Khan Women’s University which claimed the lives of over a dozen women in Quetta in June 2013. But that being a sectarian attack, the province has the least to fear amid recent threats. Yet, threats from banned outfits have resulted in the closure of schools in Makran division, while the Balochistan government has also decided to establish a special force for universities across the province. Sixty personnel of the force will be deployed at each university campus, said officials.

(With input from our correspondents in Faisalabad, Islamabad, Rawalpindi and Quetta)