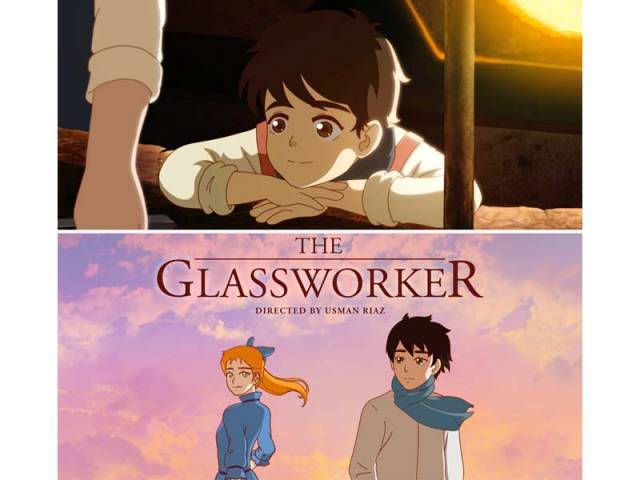 The Glassworker may still be in its infancy but the ever-creative Usman has already penned a script for it. PHOTOS: PUBLICITY

There is a special kind of charm in hand-made imagery that no other form of art can capture. Whether it is hand-woven tapestry, carefully crafted portraits or simple sketches, man-made art always leaves an undying imprint on one’s mind and no matter how old it gets, the piece of art remains, in effect, a piece of art.

A good example of this would be Disney’s beloved fairytale Cinderella. It has been roughly six-and-a-half decades since the troubled princess first cast its spell on viewers but even today, its hand-drawn animation strikes a chord. It is for this reason that Usman Riaz has decided to incorporate the same technique in The Glassworker — his first animated feature film.

“Pakistan really has no hand-drawn animation industry. With this film and studio, we hope to lay the foundation and support a new generation of artists,” Usman told The Express Tribune. The venture will be produced under the banner of his brainchild business, Mano Animation Studio.

In a time wherein Computer Generated Images (CGI) is widely regarded as the way forward, Usman’s preference for a more traditional approach has raised quite a few eyebrows. Although he acknowledges that CGI has become the new frontier for film production and animation, he feels it cannot supersede the quality of hand-drawn images. “CGI is just another development in animation and I am not against it,” shared Usman, in support of his decision. “But one thing I love about hand-drawn animation is that it never looks old. If you watch Toy Story now, you will note that there is a lot of pixilation in its textures and roads. It looks a little obsolete. On the other hand, hand-drawn is just timeless!” he added. The Glassworker may still be in its infancy but the ever-creative Usman has already penned a script for it, which is expected to be approximately 40 to 50 minutes long. A coming-of-age story, the film follows a young boy named Vincent who is learning the art of glass-blowing from his father. As he grows older, Vincent falls in love with a frequent visitor of his shop. The storyline chronicles the lives of the two lovers through their formative years and how they attempt to sustain the relationship as their situations become increasingly complicated.

The script is good to go but Usman seems to have chosen a rather unique and difficult form of animation — especially for an industry still finding its feet. However, Usman maintains that his modus operandi offers the best of both worlds. “It is not going to be anime but instead, combines the Japanese animation style with that of Disney,” he said.

Unfortunately, it will take another three years for The Glassworker to see the light of day. Usman, nonetheless, has already comprised a team of animators from across the globe, including Malaysia, South Africa and of course, Pakistan. Amongst those selected are Malaysian artist, Sofia Abdullah, and local animator, Amir Riffat, both of whom have worked on PewDiePie — the highest subscribed YouTube artist — before. Another team member, Rachel Wan, has previously served as the environment designer for the action-adventure video game, Metal Gear Solid.

The film will be utilising crowd sourced funding as well, although Usman clarified this was not due to a lack of finance but the desire to “engage the community” in the project. “Who knows, we may find more like-minded people or artists this way?” claimed Usman. The capital is being raised via online public-funding platform, Kickstarter. The Glassworker will also be Pakistan’s first fully-orchestrated movie, with a trailer being released during a Ted session this coming week.

‘Bachaana’ lifts the mood in Lahore