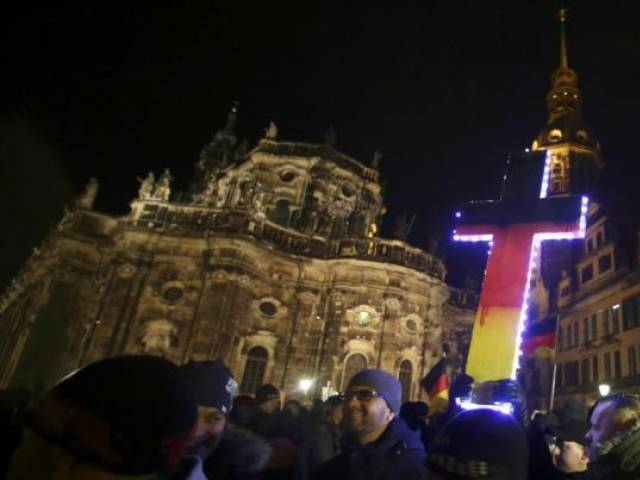 File photo of participants holding a cross painted in the colours of German national flag during a demonstration called by anti-immigration group PEGIDA, a German abbreviation for 'Patriotic Europeans against the Islamisation of the West', in Dresden December 22, 2014. PHOTO: REUTERS

PRAGUE: Rallies against “the islamisation” of Europe will take place on February 6 in 14 European countries including the Czech Republic, Estonia, Finland, Germany, Poland, Slovakia and Switzerland, the far-right organisers said on Saturday.

The demonstrations are being organised by the anti-foreigner German group PEGIDA, an acronym for “Patriotic Europeans Against the Islamisation of the Occident.”

Republican candidate Carson says Muslims unfit to be US president

Tatjana Festerling of PEGIDA made the announcement on Saturday following a meeting with like-minded groups in Roztoky, near Prague.

“The fight against the islamisation of Europe is our common objective,” Festerling said in a statement after the meeting.

The Roztoky meeting was organised by the Czech group “Bloc Against Islam” whose leader, Martin Konvicka, called Europe’s policy on migrants as “stupid and suicidal”.

PEGIDA started life in October 2014 as a xenophobic Facebook group, initially drawing just a few hundred protesters to demonstrations in the eastern city of Dresden before gaining strength, peaking with turnouts of 25,000 people.

Interest subsequently began to wane following overtly racist comments by founder Lutz Bachmann and the surfacing of “selfies” in which he sported a Hitler-style moustache and hairstyle.

The group has seen a revival with the record influx of migrants to Germany in 2015, followed by a wave of sex assaults and robberies on women in Cologne on New Year’s Eve blamed on young men from Arab countries.

Missing from the White House race: the economy