Radica­lisati­on is now just a mouse-click away... but you may be surpri­sed by who’s clicki­ng.
By Jahanzaib Haque
Published: January 18, 2011
Tweet Email 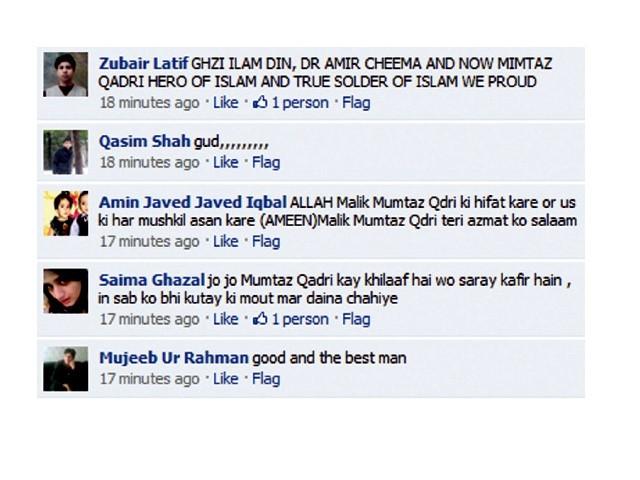 The assassination of Punjab Governor Salmaan Taseer was celebrated by many young Pakistanis on Facebook.

“Salute to Mr Qadri we love you aashiq-e-rasool,” is just one of the viral Facebook status updates many young Pakistanis shared on their Facebook walls following Punjab Governor Salman Taseer’s assassination .

Facebook pages supporting Mumtaz Hussain Qadri, Taseer’s assassin, containing hate-speech and calls to violent action in the name of Islam began popping up within minutes of Taseer’s murder. More worrying than the mere existence of these kind of pages is their potential to build connections between people with similar mindsets.

The internet’s impact on Pakistan has never been greater than it is today — according to the Pakistan Telecommunication Authority the number of internet users in the country has touched 20 million.

While this growth is encouraging in terms of increasing exposure to new ideas, enabling people to stay informed and creating opportunities to communicate, educate and entertain, it brings with it a number of problems regarding certain interests of Pakistani audiences. While the debate over Pakistan’s alleged porn-obsession has already made waves in the media, the issue of groups of young people going online to search for religious meaning and inadvertently becoming exposed to religious extremism and increased interaction with extremist organisations presents a danger as yet unacknowledged by either parents or regulators. The speed of technological advancements has resulted in a paradigm shift of rapid information dissemination and processing which many adults cannot fathom, often resulting in young people having completely unmonitored access to the internet.

“My friend supports terrorists on Facebook,” says a 22 year old medical student in Karachi who wished to remain anonymous. “After I added him I found out he was following a number of pages run by banned sectarian groups. I know he has a problem because of his status updates, but he is a totally different person in the real world. No one would know this about him until they ‘friended’ him in the virtual world and checked out what he likes [on Facebook]. His parents are not online.”

Taseer’s assassination and the outcropping of multiple Facebook fan pages for the assassin, some boasting thousands of followers within hours of their creation, has brought to light the fact that many young people have developed, and are disseminating, extremist viewpoints online.

While these activities could be termed a temporary extremist ‘fad’, the real problem lies in the small number of individuals who take this same online social networking model to far more dangerous levels, both inside Facebook, and outside on extremist websites and forums. In the space of 10 clicks, a Facebook user can access, for example, the Jaish-e-Mohammad’s Facebook page, cross over to their website to learn about militant jihad and then return to browse the page’s list of followers to connect with. Similarly, one can access the Sipah-e-Sahaba page, watch the latest posted video titled, “Allah’s azaab on Shia” and then befriend SSp Zindabad whose favorite pages include ‘Chelsea,’ ‘Lahori girls’ and ‘Prophet Muhammad (PBUH) ke sipahi zinda hai.’

The fact that such pages and such free and easily accessible content is available online, is a preeminently dangerous one. The fact that social networking sites such as Facebook (which has two million local users) can then be used by naïve, misguided, or simply curious teenagers to befriend people supporting extremist ideologies, who are also possibly connected to established militant groups and terrorist organisations across Pakistan is not just a terrifying possibility, but one we can no longer afford to be blind to.

•  Ask your child what he/she browses online on a regular basis.

•  Monitor your child’s online activities in a non-intrusive fashion. The best way to do this is to actively participate in his/her activities, such as joining Facebook.

•  Speak to your child frankly and openly about possible dangers online. Allow dialogue and rapport to build with your child. Do not impose rules and regulations.

•  Work actively to keep Facebook free of pages/groups promoting terrorism, extremism, sectarian hatred by reporting them. Form a local body to assist in the matter.

•  Report dangerous individual users rather than pages/groups as the deletion of a user account means the loss of connections to individuals as well as removal from administering harmful pages.