Indian govern­ment lifted a ban on the festiv­al, angeri­ng animal rights activi­sts who say it is cruel and abusiv­e
By AFP
Published: January 12, 2016
Tweet Email 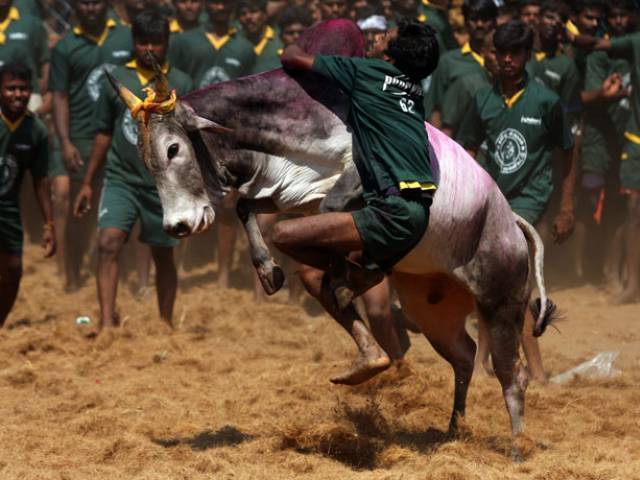 In this photograph taken on January 16, 2012, a youngster tries to tame a bull at a traditional bull taming festival called "Jallikattu" in Palamedu near Madurai, around 500 kms south of Chennai. PHOTO: AFP

With just days to go before the start of the festival, the court said it would issue a temporary stay order on the government’s decision to reverse a 2014 ban.

The Animal Welfare Board of India (AWBI) had filed a petition urging the court to reinstate the ban on the popular festival, in which bulls are let loose and young men compete to subdue them.

Activists say the sport is cruel and abusive, but India’s attorney general argued in court that the government had put safeguards in place for the animals.

He said the centuries-old festival of Jallikattu, or “bull-taming”, was an important part of local culture in the southern state of Tamil Nadu, where it marks the annual winter harvest.

But the court said it was issuing a stay order “as an interim measure”, pending further hearings.

People for the Ethical Treatment of Animals (PETA), one of a number of animal rights groups that backed the AWBI challenge, welcomed the ruling.

“The Honourable Supreme Court’s stay… is a partial victory for sensitive bulls, who will be spared cruelties such as being deliberately disoriented by being given substances like alcohol and having their tails painfully broken joint by joint and bitten for Jallikattu,” said PETA India chief executive Poorva Joshipura in a statement.

Unlike in traditional Spanish bull-fighting, the aim is not to kill the animals.

But critics say they are fed liquor and have chili powder thrown into their eyes before they are released from a holding pen and chased by revellers.

India’s former government ordered a ban in 2011, but it was not implemented until 2015 after the Supreme Court had dismissed a slew of legal challenges.

The event was cancelled last year for the first time, but local political parties have lobbied the federal government to have the ban quashed — possibly with an eye on upcoming elections in the state.

Chief Minister Jayalalithaa Jayaram is reported to have personally written to the prime minister to ask that the festival be allowed to go ahead this year.

The harvest festival in Tamil Nadu will begin this Thursday and is celebrated mostly in the south of the coastal state.