Energy projects worth $25b to be completed under CPEC: Ahsan Iqbal

Energy projects worth $25b to be completed under CPEC: Ahsan Iqbal 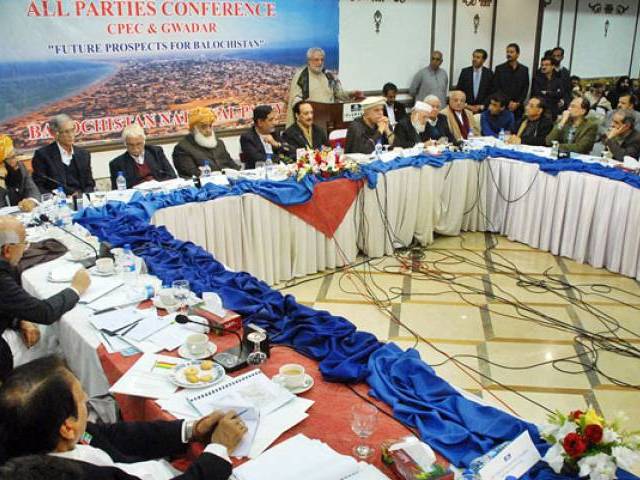 A view of the All Parties Conference held in Islamabad on January 10, 2016. PHOTO: ONLINE

Energy projects worth over $25 billion are set to be completed under the China-Pakistan Economic Corridor (CPEC), Federal Minister for Planning, Development and Reforms Ahsan Iqbal announced on Sunday.

“Energy projects worth $7.1 billion, $6.9 billion and $11.5 billion will be completed in Balochistan, Punjab and Sindh respectively under the CPEC,” Radio Pakistan quoted Ahsan as saying, during an All Parties Conference (APC) in Islamabad convened; by the Balochistan National Party-Mengal (BNP-M).

The APC was called to discuss the on-going dispute over the alleged changes in the route of the multi-million dollar project. Pakistan and China had signed an agreement on April 20 last year to commence work on CPEC development projects worth over $46 billion, which comes to roughly 20 per cent of Pakistan’s annual GDP.

The corridor aims to connect Gwadar port in Balochistan to China’s Xinjiang region via a network of highways, railways and pipelines spread over 3,000km. Work on several sections has already commenced but the entire project is expected to take several years to complete.

K-P and the CPEC

Earlier on Saturday, the Chinese Embassy in Islamabad had urged the government, its allies and the opposition parties to resolve their difference to strengthen communication and coordination on the CPEC to create favourable conditions for the project.

On Friday, a two-member delegation of the Pakistan Tehreek-e-Insaf comprising former foreign minister Shah Mehmood Qureshi and MNA Dr Shireen Mazari had met the Chinese ambassador. Sharing details of his meeting, Qureshi told The Express Tribune that “we gave an assurance to the ambassador that we don’t have any issue with China and we are in favour of the CPEC”.

Qureshi said it was pledged in an all parties’ conference (APC) that the western route would be completed first. He accused the government of retreating from this pledge. “Building just the road is not enough. Our demand for work on the western route includes development of infrastructure, rail tracks, fiber optics, LNG and uninterrupted supply of electricity,” he added.

Meanwhile, Leader of Opposition in the National Assembly Khursheed Shah also wrote a letter to Prime Minister Nawaz Sharif expressing reservations on projects related to the CPEC and called the initiatives taken on the project ‘Punjab-centric’. He asked the premier to adhere to the decisions reached at the APC held over the project in May last year.