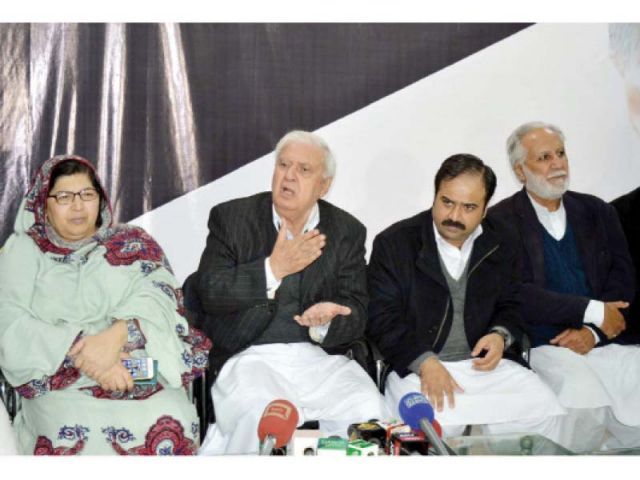 Qaumi Watan Party Chairperson Aftab Ahmad Khan Sherpao has asked the federal government to give the province its due share in the China-Pakistan Economic Corridor (CPEC).

“We lost East Pakistan because of economic disparity and keeping us economically backward may have serious consequences,” said the QWP chief at a press conference held at his residence in the city on Tuesday.

He expressed grave concerns over the Centre’s intentions to complete the western route. Sherpao insisted the western route could prove an alternative strategic route for Pakistan Army and a better chance to eliminate terrorism, besides providing access to Central Asian States.

Safer more than ever

“The government is citing security concerns as an excuse for not implementing the project in K-P. However, the army and interior minister have claimed an 85% reduction in terrorism in the province.” Sherpao said a special division of Pakistan Army would also provide security to CPEC and as several contiguous regions have been declared “safe” by the army, there should be no security threat.

While announcing complete support to the K-P government, he stated, “The corridor passing through K-P must have economic zones, fiber optics, a gas pipeline and other facilities, otherwise we would not accept the mere construction of a road in the name of CPEC.”

He revealed only Rs4 billion was allocated for the 88-kilometre two-lane road passing through southern K-P, while the Lahore-Karachi Motorway was funded to the tune of Rs50 billion.

Sherpao said the federal government could not deceive the people of K-P using claims and assurances as economic zones have not yet been identified and no surveys have taken place for any gas pipeline.

He said QWP would organise conventions at the district level to inform people about the situation. Besides, Sherpao said he would ask heads of nationalist parties to join hands in this struggle.

“Millions have been displaced and thousands killed in the war on terror. Depriving the K-P people of this opportunity will only bring more misery and we won’t let anyone do this,” he added.

Sherpao said they were not going to create a dispute on CPEC and “those who were creating issues should review their policies.”