Strict securi­ty measur­es had been put in place for Nauder­o and Garhi Khuda Bux for the day
By Sarfaraz Memon
Published: December 27, 2015
Tweet Email 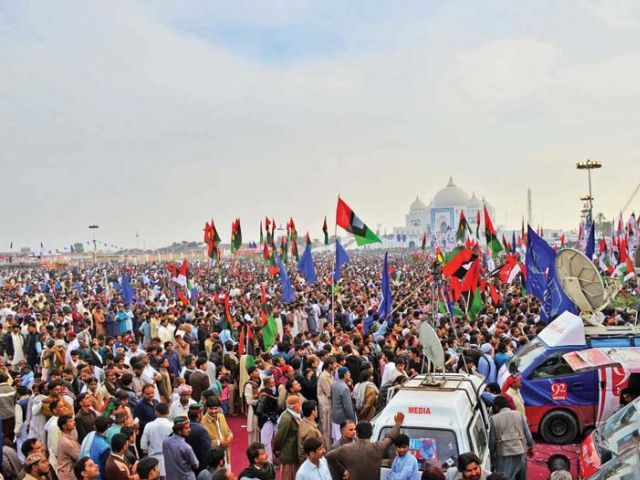 SUKKUR: The eighth death anniversary of Mohtarma Benazir Bhutto was observed in Garhi Khuda Bux — a village in Rotadero taluka that houses the Bhuttos’ ancestral graveyard — amid tight security.

Around 7,000 police personnel, including SSPs, DSPs, commandos, female police officials, bomb disposal squad officials as well as 500 Rangers personnel were deployed in Garhi Khuda Bux and Naudero for the occasion. Besides, more than 20 walk-through gates were installed at various points to screen visitors before they entered the mausoleum’s premises. The day started with a Quran Khawani at the mausoleum, which was attended by a large number of people. After the prayers, food was distributed among the participants. Ironically, as soon as the vehicles carrying cauldrons of Biryani entered the premises of the mausoleum, a large number of people rushed to get their share, but the police personnel deployed on security duty ran towards the vehicles, pushed the people back and took away most of the food packets.

Realising that most of the top officials of the Sindh government would be in attendance, the 93 police personnel from Jacobabad, who were recently sacked, staged a protest demonstration demanding restoration of their jobs. Unfortunately, no one paid them much heed.

On the other hand, two men were caught by people for trying to force their way into the mausoleum. The crowd physically assaulted the suspects before handing them over to the police. Their motives, however, remained undisclosed, as according to reports, nothing was found from the intruders’ possession. Later in the morning, the general public was forced out of the mausoleum when different leaders of the Pakistan Peoples Party, including Bilawal Bhutto Zardari, paid a visit to pay homage to the martyrs.

The PPP chairperson, Bilawal, who had arrived in Naudero House on Saturday afternoon, paid a surprise visit to Larkana city, where he went round the camps established by the party to welcome the participants. His visit surprised party workers, who rushed to get a glimpse of their leader. Some of the lucky ones managed to take selfies with the young leader too. On Sunday, as the PPP chairperson was about to leave Naudero House for Garhi Khuda Bux, his aunt, MNA Faryal Talpur, tied an ‘Imam Zamin’ on his arm as a token of security. Later, Bilawal, accompanied by his sister Aseefa Bhutto Zardari, aunt Faryal and party’s senior vice-president president Senator Sherry Rehman, left for the venue. On arrival, participants accorded Bilawal a warm welcome by shouting slogans of ‘Jeay Bhutto’ and ‘Zinda Hai Bibi Zinda hai’. Though Bilawal has made many public appearances, this was first big appearance for Aseefa, who kept waving to the crowd for several minutes. According to political pundits, it was a big day for Bilawal, because he finally had a chance to prove his mettle in the absence of his father and party’s co-chairperson, Asif Ali Zardari. The latter’s absence was excused by Senator Rehman Malik on account of health problems. The senator termed Zardari ‘Baba-e-Siyasat’, while justifying his absence.

Equal before the law: Citizens raise awareness against ‘VIP culture’