Asif Ali Zardar­i not to attend the event for the first time in eight years
By Our Correspondent
Published: December 27, 2015
Tweet Email 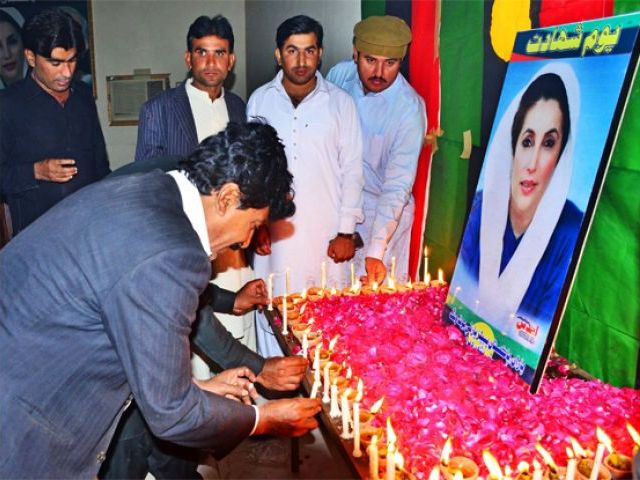 Asif Ali Zardari not to attend the event for the first time in eight years. PHOTO: PPI

Strict security measures have been taken to ensure foolproof security to Pakistan Peoples Party (PPP) leaders and other people. Around 7,000 policemen, including 26 SSPs, 22 SPs, more than 50 DSPs, commandos, lady police officials and bomb disposal squad officials, have been deployed in Naudero and Garhi Khuda Bux.

PPP co-chairperson Asif Ali Zardari will not attend the anniversary for the first time in eight years. However, PPP chairperson Bilawal Bhutto Zardari reached Moen Jo Daro airport on Saturday afternoon. Sindh Chief Minister Qaim Ali Shah and Sindh Assembly speaker Agha Siraj Durrani received him at the airport, after which Bilawal left for Naudero House. A Quran Khawani will be held at the mausoleum of the PPP leaders in Garhi Khuda Bux, after which free food will be distributed among the people. Poets will also pay homage to the slain PPP leader, after which Bilawal and other party leaders are expected to address a rally in the afternoon.

According to officials privy to the developments, a meeting of the central executive committee will be held at Naudero House tonight to pay homage to Benazir Bhutto. Besides that, the present political scenario will also be discussed, especially the confrontation between the federal and Sindh governments relating to special powers to the Rangers.

The participants coming from far flung areas to attend the death anniversary will be provided with tents.

Leaders of the Pakistan Peoples Party (Workers) visited mausoleum of the Bhuttos in Garhi Khuda Bux on Saturday, to pay homage to Benazir Bhutto. PPP (Workers) president and former senator Safdar Ali Abbasi, Naheed Khan and others also visited the mausoleum. While talking to The Express Tribune over the phone, Abbasi said that they visited the graves of Zulfikar Ali Bhutto, Begum Nusrat and Benazir.

Abbasi added that, unlike Pakistan Peoples Parliamentarians (PPPP), the motto and vision of the PPP (Workers) is that democracy is our politics, socialism is our economy and the power belongs to the people, which was the motto of Zulfikar Ali Bhutto.

“As we wanted to work for the masses, especially the dejected jiyalas of PPPP, therefore we registered PPP (Workers),” he said. Abbasi added that they have already started campaigning for membership and are hopeful that his party will emerge as a big force in the future.