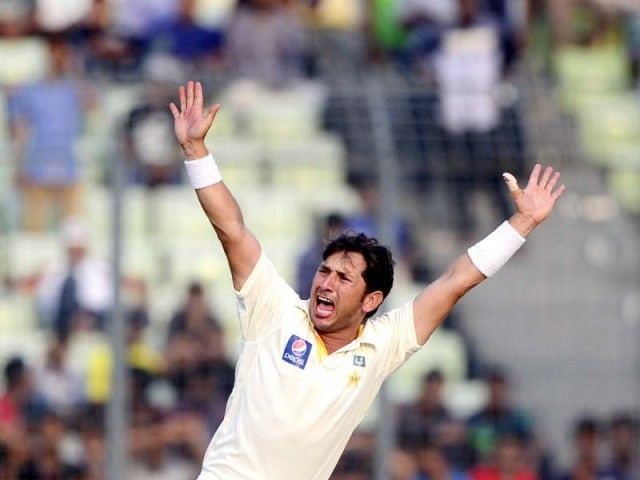 Merely days before the announcement of the ODI and T20I squads for the tour of New Zealand, Pakistan cricket has been rocked by another major scandal. Prolific leg-spinner Yasir Shah — who has 76 wickets in 12 Tests — has been charged with an anti-doping rule violation under the International Cricket Council (ICC) Anti-Doping Code.

“The sample Yasir provided in an in-competition test, which was conducted on 13 November 2015, was found to contain the presence of chlortalidone, a prohibited substance which appears in Section 5 of the WADA Prohibited List [in the category of Specified Substances],” said an ICC press release. “In accordance with the ICC Anti-Doping Code, pending the outcome of the disciplinary process, Yasir has been provisionally suspended.”

The 29 year-old was part of the team that lost the second ODI to England on the day of his doping test conducted at Abu Dhabi’s Sheikh Zayed Stadium. Earlier in the series, Yasir suffered a back injury on the eve of the first Test at the same ground and was forced to sit out. However, he made an appearance in the second and third Tests, snaring the man of the series award as Pakistan won both matches he played in to claim the series 2-0.

Speculation is rife that Yasir took a steroid to speed up recovery from the back injury and was subsequently advised to use chlortalidone as a masking agent. However a PCB official claimed that Yasir took a pill to settle his blood pressure without consulting the team doctor.

Meanwhile, the official added that the PCB was awaiting details of Yasir’s offence from the ICC and will contemplate their next move once all the details are made available.

Yasir faces at least a two-year ban if the offence is validated, leaving experts to believe that the board needs to carefully examine their reply in the days ahead.

The ICC media release added that the matter will be dealt with in accordance with the process set down in the code which is expected to be completed in the next 10-14 days.

Former PCB media manager and medical counsel of Shoaib Akhtar and Mohammad Asif during their doping offence in 2006, Dr Noman Niaz, believes the PCB needs to investigate its medical panel’s slackness over the doping breach.

“It beggars belief that a player can use a non-performance enhancing, non-recreational drug without taking the medical panel into confidence,” Niaz told The Express Tribune. “If the panel and support staff were oblivious of the medical or therapeutic use, then again it is their failing. It is tough to understand how training and diet regimes for Yasir were designed without taking his high blood pressure and medical history into account.”

Niaz also questioned the medical panel’s expertise with masking agents and diuretics, adding that Yasir might have actually been given an anabolic steroid to help recover from the back injury followed by the banned diuretic.

“I am also amazed to know that the medical panel didn’t inform the ICC or WADA, or sought a waiver or prior permission before treating Yasir.”

‘Use of masking agent can prolong Yasir’s punishment’

The ICC has clamped down hard on doping offences in recent times. Sri Lankan wicketkeeper batsman Kusal Perera faces a four-year ban for a doping code violation. A legal expert told The Express Tribune that Yasir can also be suspended for a significant period since he used a banned substance followed by a masking agent.

“It seems that Yasir, or the doctor who advised him, was well aware of the consequences hence a masking agent was taken too,” he said. “I fear a lengthy ban for him, unless the PCB can somehow prove his innocence.”

Meanwhile, Pakistan T20I captain Shahid Afridi expressed his sadness at Yasir’s suspension and said that the leg-spinner is an asset to the country. “I hope to see Yasir out there in the field again,” said the fellow leg-spinner.