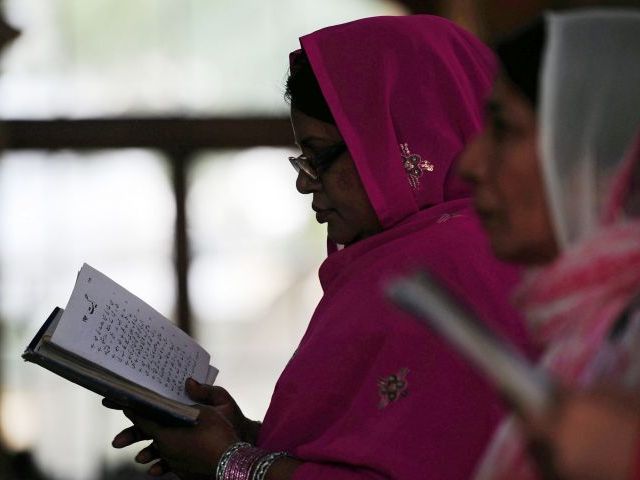 The largest Palm Sunday service in the city was held at the Cathedral on The Mall. PHOTO: AFP

ISLAMABAD: As the winter sun sets on Pakistan’s leafy capital Islamabad, residents of the city’s largest Christian slum use bicycles, donkey carts and their backs to haul jerry cans filled with water to their homes.

Situated on the capital’s periphery, the neighbourhood that is home to around 10,000 people is now at the heart of a debate over the rights of Christians in this predominantly Muslim country of 200 million, with city authorities claiming such settlements threaten “the beauty of Islam”.

Local authorities, determined to put an end to what they call “illegal” settlements, have recently sealed the area’s three tube wells in what residents say is an effort to drive them out — despite a Supreme Court injunction temporarily barring their eviction.

With the matter now resting before Pakistan’s top judges, the slum-dwellers’ sense of insecurity remains and many say all they want for Christmas is for their neighbourhood to become legalised — and the taps turned back on.

“We are worried, we are under a lot of stress but what we can do? We are helpless,” sighed 33-year-old housewife Nargis Masih, who has been living in the neighbourhood since it was built two years ago.

Like many others, she said her main concern is a lack of water.

Masih said she would like her family to be able to celebrate Christmas Day without being forced to gather more water from the nearest tap, three kilometres away at a bus station.

Christians make up around 1.6 per cent of Pakistan’s overwhelmingly Muslim population, with large settlements across major cities and around 60,000 in Islamabad.

They often face discrimination at work and routinely fall victim to the country’s blasphemy laws, which rights groups say are often used to carry out personal vendettas.

Indeed, the Islamabad slum is named Rimsha Colony after Pakistani Christian teenager Rimsha Masih, not related to Nargis, who was arrested in 2012 for allegedly desecrating pages of the Holy Quran.

Though the charges were ultimately proven false, Rimsha and her family moved to Canada in the face of ongoing threats from neighbours.

Christians in her neighbourhood of Mehrabadi on the outskirts of Islamabad were also forced to leave their homes, and the government gave them the Rimsha plot of land closer to the city to rebuild their lives.

Despite lofty promises made by the former government to safeguard their rights, Rimsha Colony remains unconnected to the electric and sewage grids, though it was supplied with water by three wells until a few weeks ago.

In 2014, the Capital Development Authority (CDA), a government agency tasked with managing the city of around two million, vowed to demolish 32 slums it had deemed illegal saying they placed an undue burden on resources and were ruining Islamabad’s pristine image.

Their efforts began in earnest in August this year, when they demolished a slum, or “katchi abadi”, inhabited mainly by ethnic Pashtuns who fled unrest in the country’s insurgency wracked northwest and whom authorities have said pose a security risk.

A Supreme Court injunction placed a temporary halt to the evictions in all of Pakistan’s slums, and asked the CDA to provide a written justification before its next demolition, noting that the right to shelter was enshrined in Pakistan’s constitution.

“Most of these katchi abadies are under the occupation of the Christian community,” read the agency’s reply.

A curious Muslim boy’s love for Christmas in Karachi

“It seems this pace of occupation of land by Christian community may increase. Removal of katchi abadies is very urgent to provide (a) better environment to the citizens of Islamabad and to protect the beauty of Islam,” it added.

While the ultimate fate of Rimsha Colony is yet to be decided by the court and with no timeline for a ruling set out, left-wing political activist Ammar Rashid said the CDA was now resorting to strong-arm tactics.

“Water is a fundamental right but the city administration is distributing it on the basis of socio-economic class,” he told AFP.

“This is a violation of the court order and an attempt to force people to leave the slums.”

Arif Jan, who was going door-to-door in Rimsha to collect funds for Christmas celebrations, cited a popular Islamic saying attributed to the Prophet Muhammad (pbuh).

Prophet Muhammad (pbuh), the story goes, said that God forgave a prostitute’s sins for the act of giving water to a thirsty dog.

“But in this country,” the 32-year-old labourer said, “it seems we aren’t even considered on par with dogs, let alone humans.”